The FMA Direct horizontal (X-Y) and vertical (Z) sensors are inexpensive, readily available, and perfectly suited for use with all versions of the Paparazzi autopilot. These sensors are only available direct from FMA Direct.
Purchase both the X-Y sensor: CPD4SENUNIT and Z sensor: FS8ZS for optimum performance. The sensor boards are coated with a very thick lacquer that is difficult to penetrate while soldering. Do not remove more coating than necessary as it prevents the very high value resistors from drifting with humidity changes.

The FMA sensors were designed to operate from a 5V source but are typically powered in Paparazzi installations with 3.3V, ensuring that the sensor's analog output does not exceed the 3.3V limit of the ADC inputs on the ARM7 microprocessor. The sensors work well at 3.3V but their amplifier gain is effectively increased by a factor of 5/3.3.

Either extreme is bad, of course, but it should be noted that these are only extremes. For reference, a stock FMA sensor run on 3.3V will saturate when flying over black asphalt on a very hot, dry Arizona day, a modified sensor will not. Similarly, a modified sensor will show more signs of neutral-offset when operated in cloudy weather or other low contrast situations. It is suggested that sensors only be modified if needed for very high contrast locales.

The same operation can be done with the vertical sensor by changing R3 from 510 ohm to a 1K ohm.

This is MyResearch.lt open source data. The sensor is presented as a replacement for a servo potentiometer. It can be used in a same way as the FMA Direct Co Pilot Sensor. The resistors 4k7 are not needed if it is not connected to a servo directly. 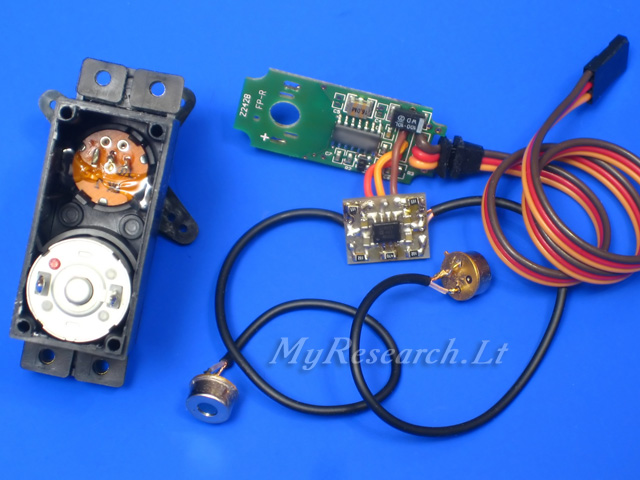