A rotorcraft is basically an aircraft that uses propeller lift to keep itself in the air. There are many types of rotorcrafts, but there are a couple of global classes:

Single rotor (helicopters) which divide into:

Multirotor (copters) which are:

And if first class of rotorcrafts can use gyros only for yaw stabilization, multirotors need 3D (three axial) gyros to stabilize itself hovering which by the way do not guarantee that craft holds the spot, just not letting it fall on side.

Firstly you should choose correct airframe. If you're novice to copters quadrotor will be a good choice for several reasons: firstly it's most common type of copter, then most of hardware works with such setup "out of the box" and there is plenty information in mailing lists. By the way, it would be a good idea to decide how do you want to use your copter. Generally it will allow you to choose correct motors and ESCs for copter.

ESC and motors should be chosen with weight economy in mind. i.e. good idea is to purchase ~600-1000 gram motors (NOT more unless you know what are you doing) and 15-25A ESCs depending on your motor current consumption.

Airframe typically consists of "center hub" and "rotor arms" which due to ease of aircraft control and low crushablity are made of light materials (for example aluminum for arms and perforated carbon for center hub). There is a wide choice of ready to build aftermarket airframes if you don't want to bother with building one.

Generally there is only one important thing left it's balancing whole copter after you put it together. There is one simple rule: ready to fly quadrotor should have it's center of gravity (COG) in the middle. By "ready to fly" I mean - every equipment that should be placed on copter including battery and payload.

I recognized that I spent a lot of time to search all compatible components. That list should help you to make your chose easier and faster. 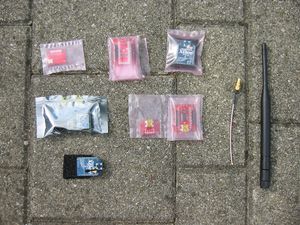 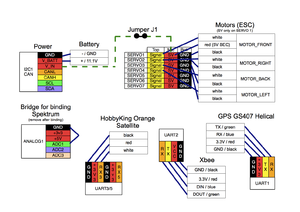 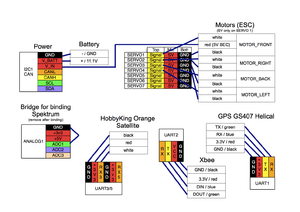 This scheme shows a possibility to connect the parts to the Lisa M.
In this version, the board is powered by the 5V BEC of the Servo 1 ESC.
Jumper J1 is bridged. The battery on I2C1/CAN is only needed to measure the actual battery voltage.

Usually you get a calibration file from the supplier. If not you can calibrate you Aspirin IMU (or else) by following this Tutorial:
ImuCalibration

How you get your Local Magnetic Field values is written down here:
Subsystem/ahrs