I am a University of Washington Research Scientist who studies bioacoustics and animal behavior. I also design and build hardware and develop software for use in various scientific research projects. Besides science, my other passion is RC model aircraft, particularly gliders and electrics. My Paparazzi project is an attempt to combine my work with my hobby.

I currently live in Portland.

Field biologists, conservationists, and wildlife management agencies have many potential applications for small UAV systems. However, UAVs aren't frequently used in these areas because 1) they are perceived to be too expensive, difficult, or complex, and/or 2) people are simply not aware of the potential uses of UAVs in their field.

The goal of this project is to develop and promote a UAV platform for biological research, conservation work, and wildlife management. The UAV system I am building is intended to be extremely rugged, cheap, relatively easy to use and maintain, flexible, and hackable for different missions. The system is ultimately intended to be used in extremely difficult and remote field environments where there is no internet or reliable power source (e.g., African bush, South America, South Pacific, US Pacific Northwest wilderness). 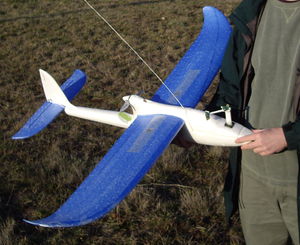 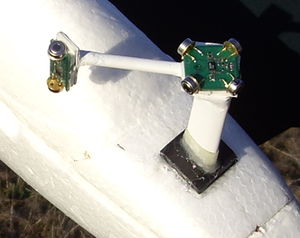 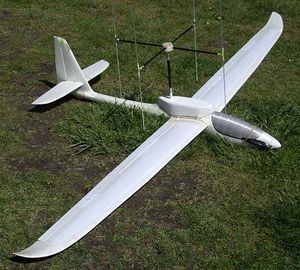 Flight 1: Takeoff on manual w/ no modem link worked fine (aileron still has very little effect, due to overly stable design). When I switch to AUTO1, the plane is still controllable and (apparently) AP stabilizes. However, motor shut off. (this was because we didn't click the Launch button before starting the flight). When I switched to AUTO2, the plane did a circle near the switch point, and then seems to start wandering away. The GCS says the plane is in “hold mode”. It may be that the plane would have circled back around, but it’s hard to tell. In any case, it didn’t show any tendency to head “home”, even after I re-defined home as approx at launch point.

Flight 2: We installed modem and launched in manual mode. At altitude, I switched to AUTO2, and plane cut motor (postmortem: battery critical trigger) and started wandering around over a house a ways off, not near home, standby wps, etc. When I switched to manual mode, I lost all control of the plane and it nosedived into the ground from a fairly high altitude.

Easystar flight test. Paul Cox assisting. At a small field in Vancouver. It was overcast and cold. Occasional rain / showers / hail. Wind sometimes calm, other times 5-10mph or so.

Flight 2: started in auto1 mode. Figured out the correct sequence to allow auto2 mode to launch: click Takeoff, then Launch, then launch the plane in Auto1 mode. We also fixed default altitude, which was set too low (ground alt was 60m). In this flight, I was able to get ES to circle over home and auto-maintain altitude by varying throttle. However, flight behavior was affected by the wind: the plane would get downwind and then flounder with nose pitched up. Eventually, I switched to auto1 and dipped the nose down to penetrate into the wind and get the plane home.

Flight 1: launched in Auto1 mode. Climbed out and switched to Auto2 for route testing. The plane is still over-correcting when making course changes. Tends to "waffle" around and never does neat circles around wp,etc. Tested line 1-2 in basic config. Worked more or less, but waffling caused plane to wander around a lot.

Flight 2: launched in Auto2 mode. Plane dove into ground, hit and skidded, then rose into the air. Shallow climb at first (100% throttle), then began steep circles at high speed and low altitude. Eventually crashed. I had tried to switch to manual mode on RC TX, but AP did not respond (only after plane was on ground). Probable issues: CLIMB wp alt=25m was too low, climb pitch too low, CLIMB wp too close to launch point (should be at least 200-300m out I think).

Flight 1: Easystar, using new flight plan w/ triangle mission (fly between 3 wps in loop). Launched in auto1 mode. There was a problem w/ pitch, likely from canopy tilted forward from last crash (whole nose section was compressed a bit). Adjusted pitch in flight in auto1 to correct for level flight. I switched the mode to auto2 and we let the plane stay in standby mode (flying around standby wp) so that we could tweak settings: 1) set nav circle to 75m, 2) varied nav gain, and it seems to work best at 0.8, 3) alt gain: turned out to be just right as is. At end of flight, the plane began losing alt, but GCS reported high throttle value. This was because the motor battery was running down (seperate motor and AP batteries). I switched to auto1 mode and landed.

Flight 2: Easystar w/ same flight plan. Nav circle reduced to 50m (original). The wind was a problem in both flights: varied from 12mph or so to near 0. When wind was high, the plane had trouble with courses requiring cross-wind flight (over or under corrected), BUT the AP did a good job of recovering from mistakes. In triangle mission, the plane did exactly as I wanted: flew to within nav circle radius, then flew a line to next wp. Landed in auto1 mode before battery level declined.

Flight 3: Cularis w/ standard RC receiver (no AP on board). Cularis flight was first since a crash in Seattle last year. The Seattle crash was luckily at low altitude, but caused some damage, including cracking wing mount and compressing nose. The original crash was caused by glitching in the RX where plane became unresponsive. Today's flight was to test the semi-repaired plane (a few things still broken, including wing lock mechanisms). In this flight, I just wanted to test the plane and repairs. The result: initial launch, plane climbed strongly (quite windy at this time BTW), but lots of up-thrust (maybe due to nose compression from first crash, but also possibly balance?). After trimming flight and flying around a bit I attempted to land. The plane was a bit downwind and on final leg to land when it began glitching again at low alt (about 10m). I managed to straighten it out and flew it w/ only occasional control until it landed far out in the field. When we reached downed plane, it was unresponsive to TX commands and motor was trying to run (maybe 25% throttle). I disconnected battery and reconnected and RX behaved properly. I don't know what's wrong but there seems to be a glitching problem unrelated to any other onboard electronics. Maybe the speed controller is causing interference. This may be resolved when I use an AP w/ plane.