Solar Storm is the result of a conceptual design study for a Hybrid-Solar cell powered MAV. And as far as I can search through the internet Solar Storm is the smallest solar MAV (which is autonomous) in the world (please correct me if I am wrong...).

Frame is especially designed for its particular flight conditions by using computer aided drafting and moulds have been milled precisely with a 3-axis CNC in order to achieve the designed shape and surface quality. 20 S32 Solar cells bonded under vacuum by the help of a silicon based special glue from MAP-Coatings.

You can also check out Fire Storm page to see a version without solar cells. 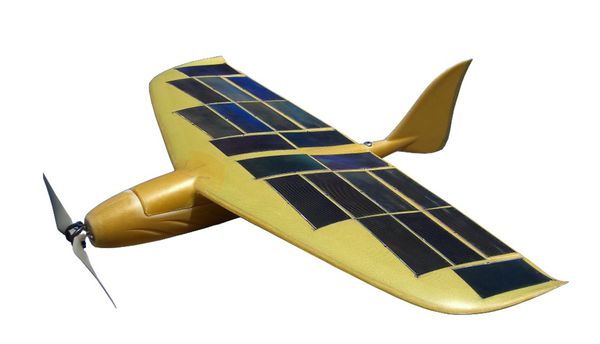 The third flight of Solar-Storm (with 1320mAH battery) has just finished :) Achieved endurance is:

Solar-Storm has only 2 test flights yet. First to tune :) and second to measure the endurance.

The numbers we got from the first flight test (by using only 730mAH battery) are encouraging:

Note: It was a partially cloudy day, sun was hiding behind the clouds for 20 minutes of the flight.

The following plot show power numbers for 7 minutes. From top to bottom, the curves show:

We can observe on the last curve that the battery was sometimes charged in flight ! 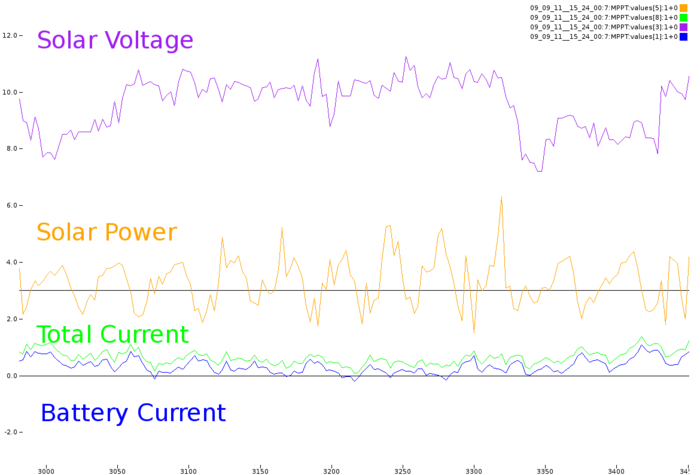 Solar-Storm will be capable of flying more than 145 minutes at its designed conditions. But not tested yet :)

Thanks a lot to MAP Coatings Company for helping us in the hard bonding process of solar cells on to the wing.