Antenna options for the Tiny and Paparazzi GPS units

The Tiny 1.1 features a 28mm square ground plane intended to be centered below the Sangshin 13mm patch antenna. Much better performance has been seen with the 18mm antennas and an augmented ground plane. The ground plane is a critical part of the antenna affecting not only the gain and polarization characteristics but also the center frequency of the system. Users are advised to expand the ground plane to approximately 36mm square, centered on the ceramic portion of the antenna (not the pin). This can be done with copper foil soldered to the vias of the existing ground plane. 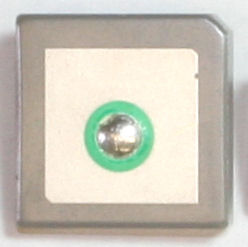 The Sangshin KSA-ST1580MS18 antenna has proven to offer the best performance of the currently available options. These are available from any Sanshin distributor such as rfmw (here) and cost approximately $6.50/ea. in small quantities. 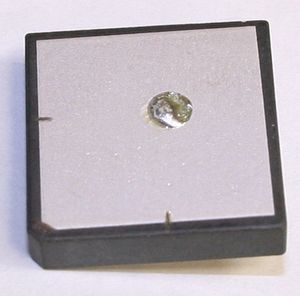 Offering identical performance to the Sangshin in a less attractive package is the Emtac 18mm antenna. The part number for the standard 1580MHz 18x18x4mm is ANA1580T18D40 and is not listed on their website. Other frequencies are available on a special order basis and the 1584Mhz has proven to outperform all other frequencies when used with a 36mm ground plane and no radome. The use of a radome (any material covering the antenna) or a larger ground plane should theoretically favor even higher frequencies. 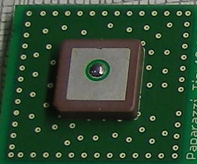 The Tiny 0.99 (not 0.9) and 1.1 were designed around this antenna but users are advised to install 18mm units for better performance. 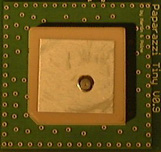 The Tiny 0.9 was designed around this 1583Mhz antenna and performed extremely well. Emtac has replaced this with an 18mm model that they claim offers even better performance. 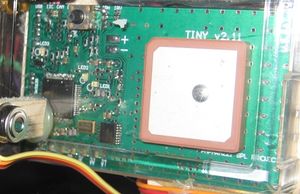 This antenna is popular among UAV designers due to it's natural rejection of other radio frequencies such as those originating from the modem or video system as well as it's improved rejection of signals reflected from the ground. U-blox recommends this antenna and features it in their reference design. Frequency and polarization are not dependent upon ground plane geometry so this antenna is sold only in the true GPS frequency of 1575Mhz. The geometry makes this antenna very inconvenient to mount, especially in an airplane. Some very non-scientific testing has been done with one of these antennas connected to a Tiny with a short length of 50 Ohm coax above a 120mm square of ungrounded aluminum foil and performance was adequate. The helical design should theoretically outperform a patch in the air, but not on the ground, so any organized comparison will be difficult. Possibly the most important aspect of this antenna is it's natural RFI filtering, which should be evaluated further.