This page is part of a final thesis project made for Vaasa University of Applied Sciences. The idea in this project was to implement the Paparazzi hard and software to an RC airplane. The project began in June 2009.

The project is sponsored by WRD Systems

After a long period of choosing the plane, the Sig Kadet was chosen to be the one. Below are listed some characteristics why it was chosen.

In the process of choosing the plane the following properties of the plane had to be decided such as following just to name a few:

There are several matters that needed to be taken into consideration when choosing the plane type. Different types of planes have different weight, dimensions, fuselage size, manoeuvring capabilities, maximum pitch angle, stall speed, wing tip design and so and so on... Just like there are thousands of different kinds of real airplanes, there also are thousands of different kinds of model airplanes available.

These model airplanes come in many types and sizes ranging in weight from a few hundred grams to several kilograms and in dimensions from a half meter wing tip size to even one meter. Some of the model are so called "ready-sets" these come with comfort of not having to build it yourself but have the down of being difficult to customize the others are semi-ready or DIY -models. We were glad to notice that there was plenty of room inside the plane to fit extra payload (the Paparazzi electronics). What we were looking for was an easy to build and fly aeroplane with enough power and space to carry some payload, the payload being the Paparazzi autopilot hardware that weighs about 300g.

Making decisions in purchasing an aeroplane is a win-lose situation. On all situations where you win there is always a downside where you lose. For example: a bigger engine brings power and speed but adds weight and either the fuel tank or the battery takes space also you can't fit a big engine in a small plane, more wing area brings more up-thrust and stability but adds air resistance thus hindering speed and losing power to win the drag.

If we had been looking for an airplane for just for flying that would have been easy but the choice was difficult because we needed the ability to carry payload and none of the RC models are designed to carry extra payload. Even if you can fit with extra payload and your plane being able to carry it, the balance point will be different from what the manufacturer has designed and if you started correcting it with extra balance weights you lose power because the plane has become heavier. It is not so disastrous if the extra weight is located near the nose of the plane but if you are forced to place it near the back then the plane becomes unstable. Adding extra payload to an already heavy plane doesn't have such a huge effect on balance than it would have on a light plane. For example: if you add 300g to a 3kg plane the new weight 10% greater than the original but if you had put the same weight in a 700g plane the new weight is about one and a half times as big as the old weight.

Choosing the radio controller is much simpler because they all basically work the same way and the only difference is the number of channels it can use. When choosing a radio controller, especially with Paparazzi in mind, make sure to buy a controller which has at least one more channel than the manufacturer recommends.

The receiver is also from Hitec, it's a HFS-05MS. 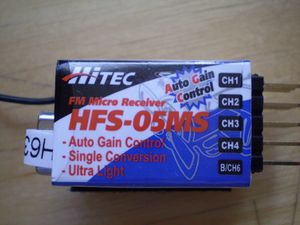 In order to use this one with Paparazzi, the PPM signal can be easily obtained as shown here: 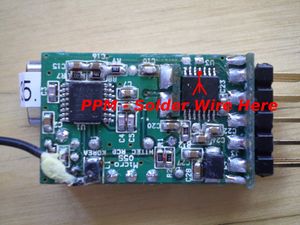 Why Li-Po? "Li-Po batteries are light and small and have large storing capacity. As rule of thumb Li-Po batteries have four times the capacity compared to same sized and weighed Ni-Mh batteries". 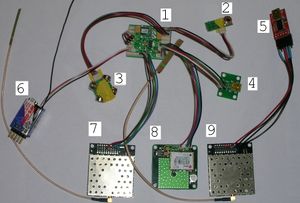 Configuration of the AC4790

While operating the AC4790 in broadcast mode works, it is probably better to configure the modules in addressed mode. To do this, put the MAC address of one modem as destination on the other, and vice versa. Also choose the option Unicast Only, which would make the modems immune to broadcast packets.

This works very well, and upon moving a way-point in the GCS, the response was much quicker than in broadcast mode.

The images below show the current configuration on my modems. 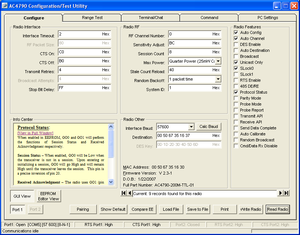 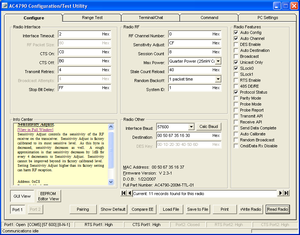 (With thanks to Mr. Helge Walle for providing this information and screen shots)

A VMWare image containing Paparazzi as well as Wine+U-Control is available here. It is based on Ubuntu 8.04 LTS, but has most of the standard included tools and software removed. (user:paparazzi password:paparazzi)

In the screenshot you can see a Paparazzi GCS run on Ubuntu in a virtual machine and Flight Gear run on Macintosh. The navigation signal is broadcast in the local area network using UDP.

The reason why there's no land under the plane is that there were no landscape textures loaded into the Flight Gear at that moment.

How to Launch Simulation

Here's is an Applescript shorcut for Mac users to launch Flight Gear to see the simulation.

The run this open Script Editor from /Applications/AppleScript copy paste above code and compile and run. To save it as an executable you must "Save As" and click the "Run Only" to true. 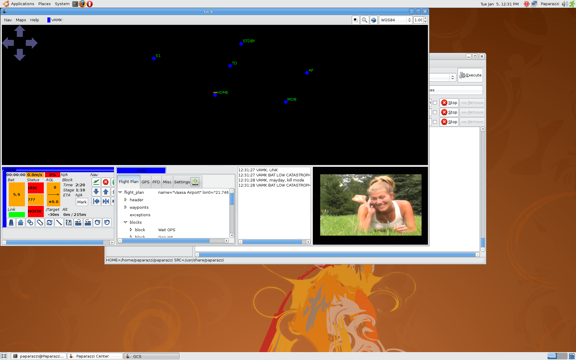 The plane was now finished. The constructing took about 40 hours. Most of the time went to fecthing tools, reading the manual and waiting for the epoxy glue to dry,

Showed the newly build plane to members of the flight club. They noticed the battery connectors should be have reverse for safety reasons. I had soldered male to battery which should have been in the wires of the engine controller.

Results: no smoke, radio works. engine runs one servo did not work. Noticed that there didn't come wires or adapters to connect the battery to the charger.

A rainy day, not possible to do tests outside.

Building of the "tower": 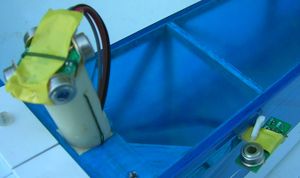 I put it together in about an hour.
Price: 185€ + 7€ shipping to home door
Delivery time: 2 days
From: karkkainen
The simulator is OK and the plane was very fast easy to put together. The package included everything so no time wasted googling every place for the best bargain etc.

Condistions: Clear but wind more than 6 m/s. Too strong wind to fly. Will try on again on 13.th. What I wanted to test was my own plane first and then then the SIG on manual but since the wind was so strong I just tested the GPS accuracy and sensors.
Results:

By the way the reason why the Parkfun plane it said to be so light is because the value from the manual only means the fuselage weight without any other parts like: engine and battery etc.

A certain researcher at Mekri research center in eastern Finland accidentally noticed my log and made a proposal about cooperation about researching UAVs. The have doing aerial photography for several years now and have come up with their own design. The proposal came just days after we realized that the SIG was too light to fly windy weather. The basic idea in this model is simple. A 32 mm PVC pipe with wings, v-tail and cargo space made out of material called EPP. All flaps are made out of balsa wood. EPP is easy to fix and modify. The availability of the material is really bad at the moment in Finland because the only factory burned down and ordering it from abroad is too expensive. The PVC pipe is virtually in-breakable the wings again will break on crash. The engine is located in the back and uses a folding propeller therefore providing better cover for the engine and the propeller axle. We have kicked power up a notch and we are using two 2.2 Ah Li-Po batteries. The parts were bought from mostly SIL shop. Notice you get 10% discount if you are a member of SIL. The most important part of the membership is the insurance. Servos were bought from HobbyLinna the rest the spinner kit and the propellers were from Kärkkäinen.
Dimensions 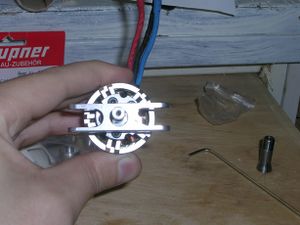 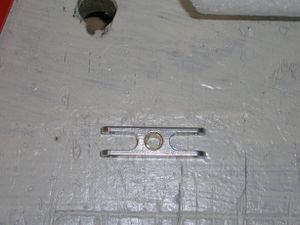 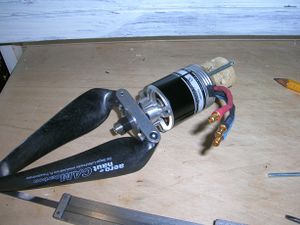 In the picture serie you can see that folding propeller holding fork inner diameter is larger than the prop adapter outer diameter, so I had to cut a piece of metal pipe with inner radius 6 mm and outer 8 mm, Luckily I happened to find that from home. The wooden cylinder that holds the motor in place and goes inside the plastic tube had to be heavily modified. The hole that goes through lengthwise had to be largened, I needed to drill two new holes for the screws that hold to wood inside the plastic tube. Also two of the tracks on the sides of the wooden piece had to deepened and then a metal piece had to done in order for the screws to have something hold on to. Also the four 3 mm screws that hold the engine had to changed for shorter ones and their heads modified so that the wooden would fit inside the tube. Actually the wood would hold on to the plastic with just one screw because the engine pushes itself inside the tube but two are used just to be sure. Also notice the larger half of the engine moves with the propeller fork. 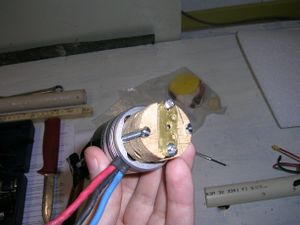 Backside of the wooden cylinder 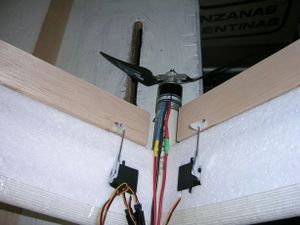 Tail with engine in place and wires connected 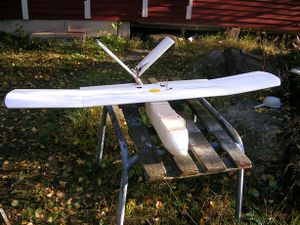 Overview of the new plane 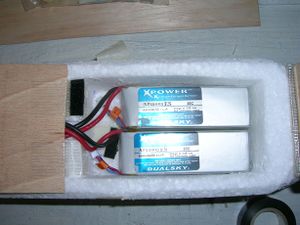 Batteries fitted inside the plane 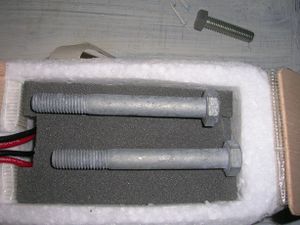 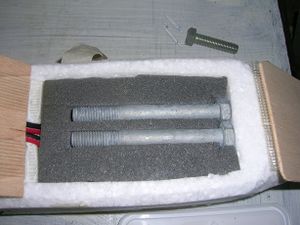 Finishing details. Made holes for the ESC on/off -switch and the receiver antenna. Trimmed servos and put a drop of glue on one side to hold them in place but allowing them to be detached if needed. I taped to the all of the wing outer edges to prevent it from being scratched and adding a little bit of extra support. Still need to make the balance point closer to the nose because now while the plane has an engine at the back the back is quite heavy of course. Planning to take it airborne tomorrow evening and of course take video. 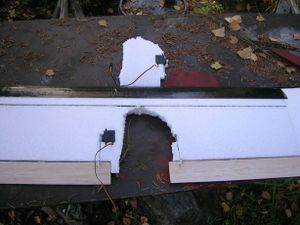 Cause of the crash. 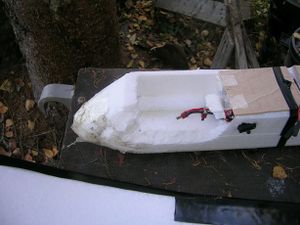 Check out Video here. You can see the crash at 2:35. It's not a very good video because my camera sucks and it's so difficult to point it when you can't see thing you want to shoot from the screen. Will need to borrow a better one from someone.