US Just started using paparazzi on a Twinstar. It works reasonably well, but I'm still learning to tune it (altitude does not work well).

The thing that I don't currently understand how to do in KML is the conversion from the airplane's frame of reference to the world frame of reference. I need that to be able to show the rudder, ailerons and elevator in there actual positions. I haven't figured out the math yet, the likely candidates are DH transform, Euler angles, or Quaternions....I seem to have forgotten my linear algebra. 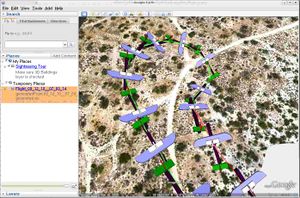 I had not realized that there was already a place to put a GCS to KLM converter so I wrote my own (in perl) that works from the command line by importing the *.data file and converting it to KML then packs it all up into the KMZ.

This file contains the KML and associated file along with perl source code and the *data and *log file that I used to create it. (a kmz is just a set of files that can be zipped or unzipped with ubuntu's 'zip' or 'unzip' command line tool). To get to the script (utm_geo_convertion.pl) download and 'unzip Flight_10_02_14__18_04_10.kmz'.