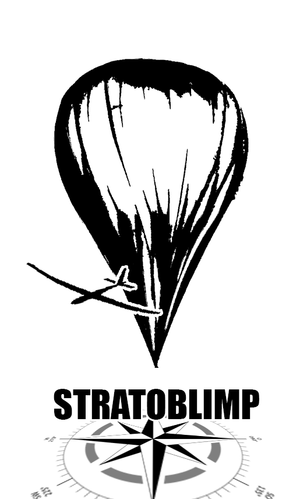 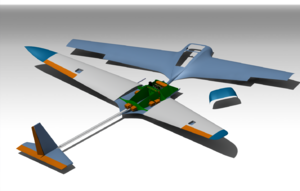 On the 12th of November 2012 at the faculty of aerospace engineering of the Delft University of Technology a design synthesises project started called StratoBlimp. Ten students get the task to develop an autonomous UAV that is launched from a balloon in the stratosphere and returns to its launchsite. Ir. B.D.W. Remes of the TU Delft MAV lab, Dr. ir. C.J.M. Verhoeven of the micro electronics department and Ir. S. Engelen of the space systems engineering department are supporting the students on this project.

In alphabetical order, the students working on this project: All are members of the Delft University of Technology faculty of Aerospace Engineering 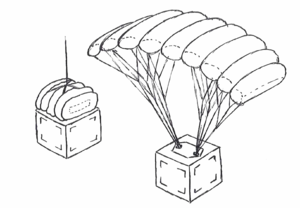 The team came to tree different concepts that could fur fill the mission requirements. The flying wing, a drop shaped glider with a cross tail and a para glider. The para glider was the first concept to be cut due to the difficulty of calculating it's glide properties and the low forward speed it could achieve, making it only suitable to fly in slow wind conditions.

The drop shaped glider has been chosen as the concept that will be developped and build. The team believes this design is slightly more stable which is important to guarantee the successfull transition from freefall to normal flight. The fying wing had the advantage of beeing a simpeler design (no tail boom, no tail surfaces) and it is a bit more aerodynamic efficient. The team is confident though that both designs would work so we encourage the communinty to try and tackle this challenge with a flying wing. 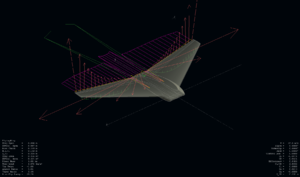 The structure is build up from a foam core material, a composite skin and an epoxy resin. For the composite skin a choice between carbon, glass and aramid fibres could be made. The carbon fibres are discarded, since they can result in problematic communication. Because the lightest possible return vehicle is required, because in this way more payload can be carried or a higher altitude can be achieved. By following this philosophy a Kevlar 49 fibre sheet with a thickness of 0,071 mm and a Rohacell 31 foam core have been selected. These materials have the lowest structural masses and can still be easily used in structural applications. Furthermore the Kevlar 49 fibres have a great impact resistance, protecting the return vehicle during a crash or belly landing.

The load cases resulting from the aerodynamics department by using XFLR are transformed to shear stress and bending moment in the wing and fuselage. A FEM analysis is used to perform a complex structural simulation. The structural simulation shows a detailed visualisation of where the structure will bend or twist and shows the values of distribution of the stresses and displacements. Catia V5 has an integrated tool to perform this structural analysis and is used to see whether structure and material can safely withstand the specified forces and find the critical stresses in each part. The figure shows the structural analysis of the return vehicle, where the wing is split into two parts and clamped in the middle of the fuselage to have a representative case. The material properties of the laminate (Rohacell 31 and Kevlar 49) are inserted. It can be concluded that the actual loads during the entire mission never exceed the design loads the return vehicle can handle in theory.

The production of the return vehicle and ground station is the first step after the design, at the moment a prototype is built. First of all XPS foam is cut with a hot wire and sanded to the final shape. This plug is covered with a primer and covered with glass fibres. The second big step is to repeat the hot wire cutting with the Rohacell 31 foam and produce the Kevlar skins using vacuum infusion. Lastly cut-outs are made in the Kevlar skin and rohacell foam, to fit in all the components and wires for the servos. When this is finished, the skins can be glued to the foam using epoxy glue.

The Stratoblimp mission is unique in many ways, especially the aerodynamic conditions are quite special. These conditions bring about extra trade off criteria. Firstly the initial freefall requires a self stabilizing design. This is realized by having the center of gravity far forward of the center of pressure. This is a lot easier to implement in the drop shaped glider. Secondly, high altitude gliding requires airfoils that delay separation at low Reynolds numbers. It is expected that this will be easier for a non-reflex airfoil, again an advantage to the drop shaped glider.

There are also criteria that are more common for UAVs. These are the flight efficiency at higher Reynolds numbers, the structural loads due to maneuvre and gust, and lastly the landing. At higher Reynolds numbers, the flying wing has the advantage of having less surface drag, it is structurally lighter, and at landing it has no tail that is sensitive to impact. The final concept selection is a trade off between the stability and performance at high altitude, and the efficiency and structural advantage at lower altitudes. The drop shaped glider stability at high altitude was identified as the most valueable characterstic, while the disadvantages accompanied by the concept could be compensated for.

The team is looking into several communication options, the requirement to have two way communication complicates things a lot. To ensure building and operating the system is reachable for everyone the team set the extra requirement of staying outside licensed communication regions. The design must comply with ITU region 1 regulations and laws from The Netherlands and neighbouring countries as this is relevant to this project.

This falls into the category that needs a license but it is mentioned anyway as it might be a great solution for many similar projects out there. It is being recommended by many developers having experience with high altitude ballooning.

A basic amateur radio license allows for a much greater transmission power in the ISM bands. This enables for a long range uplink in the 70cm band and 2m band.

Using the available amateur radio networks like APRS could make a downlink fairly simple as a ground network already exists.

Three different frequencies have been investigated: the 430MHz, the 868MHz and the 2400MHz bands. Setting up link budgets for these different options resulted in the choice for the 868MHz bands, a theoretical range of 150km should be achievable with a sufficient data rate for up and downlink. The antenna on the return vehicle would be a half wave dipole antenna mounted vertically near or on the tail to have the preferred radiation pattern. The ground station antenna will have to be an auto tracking station using a dish or helical antenna.

Depending on the mission, satellite communication could be the way to go. It is very reliable but more expensive and you pay per volume so it is not recommended for streaming down data. A good module would be the Iridium 9603. Its mass is about 10 grams [1]. Cost for the module would be around €230 [2] not including antenna. Operation costs for this module are around €10 a month plus €0,05 per 50 bytes transmitted [3]. Messages from the module to the ground could be posted on a web server of your choice using the HTTP POST method. The data could also be send in mail format but this is not practical for this application. Messages to send to the module can be sent to the Iridium gateway.