Thanks to Chris we have a way to use virtually any RC receiver with Paparazzi without any modifications to the receiver.

This board plugs into the servo output ports on a R/C receiver and encodes them into a single PPM pulse suitable for the paparazzi autopilot. It is also possible to remap channels by changing the connection between the receiver and the encoder. Want Tx ch5 to be output on ch7 of the ppm stream? Just connect the Ch5 signal from the receiver to the Ch7 input on the encoder. 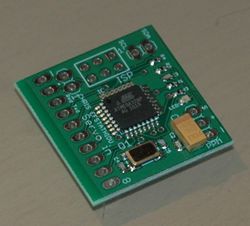 Note: see the ATmega328_PPM_Encoder_Board page for the more recent hardware version. Wiki refactor in progress, these pages will be merged.

Programming the board can easily be accomplished using an AVR ISP (in-serial programming) programmer. These are inexpensive and can be found many places online. Once you have the ISP connected to the PPM encoder, simply use avrdude with the following command:

The above link is to ATmega326 firmware. If you load that onto ATmega168 hardware, the LED won't blink as described in the users manual (but otherwise the PPM encoder seems to work). To build firmware that works correctly on the ATmega168 hardware, edit the makefile. Find this: