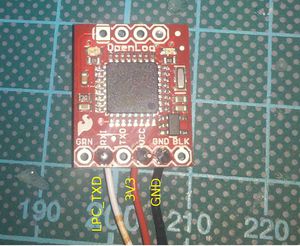 The OpenLog is simply connected to the TX-Line of the AP. Once the AP is powered, it starts to record. In general there is one Problem with the stock-firmware of the OpenLog. If it gets an escape-character (CTRL+Z) it switches into command-mode and stops logging. But the telemetry stream is nearly arbitrary. So we have to deactivate this feature, it isn't needed for our application at all. Therefore we have to reprogram the OpenLog. You need an AVR-programmer like the i.e. usbasp. You have to wire the ISP to the accoring pins of the OpenLog. You need the avrdude package installed.