Difference between revisions of "Installation/MacOSX"

Update on OS X installation: Currently, arm-none-eabi-gdb on 10.6 should be broken (gcc-arm-embedded can be compiled by hand if required without python support, or installing python2.7 as a framework from a dmg might work).

This page describes the installation of paparazzi on a MacOS X.

There are not as many MacOS X users as there are Linux users. We are always looking for more people to help with the effort of maintaining the OSX port. If you are a frequent user of OS X and understand the underpinnings we are looking for an official OSX maintainer at the moment. Let us know on gitter: https://gitter.im/paparazzi/discuss

There are a few legacy installation approaches that might work on older OS X versions but are known not to work on the current Mac OS X. They all can be found on the Installation/MacOSX-legacy page.

Note: Macports used to conflict with homebrew. According to the homebrew website it is not the case any more as homebrew overrides the environment variables to have a pristine environment as if macports or fink were not installed on the system. It is not confirmed that opam does the same, so it probably is still a good idea to not have macports or fink installed simultanously with homebrew.

to your ~/.profile, ~/.bashrc, ~/.zshrc.local or similar. Note: You have to restart your terminal for the variable to be set, or you execute the export manually in your terminal by pasting the line and pressing enter.

Download install_pprz_brew_highsierra.sh, and run it. It's been successful on El Capitan, and High Sierra with homebrew, and a quartz gtk.

Try starting ./paparazzi inside of the XQuartz X11 terminal.

It is a known bug in homebrew. You have to install full XCode you can't just use the command line tools.

I was having trouble getting paparazzi to build against the native libxml2 libraries on Mac OS X v10.11 - “El Capitan.” The problem was that I was missing the header files – in fact the entire /usr/include tree was gone.

Here's the error I was seeing during the make process:

The fix is to run xcode-select --install. Apparently you can have the developer tools installed, but not have the “command line developer tools” which include /usr/include. Unfortunately, thanks to the “rootless” feature, this Apple-sanctioned installer is pretty much the only way to get /usr/lib back.

If running 10.14 Mojave, you'll have to perform this step after installing the command line developer tools:

Paparazzi can be started in the usual way

Running on MacOSX without any network connexion

When running pprz on a mac with no internet connexion, you might encounter

It's a known problem for the underlying Ivy bus protocol. The easiest workaround is to connect to a Wifi hotspot, the longer one is the following:

And to return to the previous state

Changing the GTK look and feel

Run /opt/local/bin/switch2 to select a different theme. More detailed instructions can be found at http://gtk.php.net/manual/en/html/tutorials/tutorials.installation.macosx-stepbystep.html

Additional themes can be downloaded from http://art.gnome.org/themes/gtk2

A good choice is:

No drivers need to be installed in order to program either the STM32 based or LPC2148 based autopilot boards (ie TINY, TWOG, Booz, Lisa/L, Lisa/M) using a USB port. However telemetry between the vehicle and ground control station requires a modem. On an Apple Mac this will generally be connected to a USB port. Whatever modem is used it will be necessary to load drivers that allow Paparazzi to communicate with the modem. It is not possible to describe all possible modems and their configuration. However the most commonly used chipset for USB to serial communication is produced by FTDI. Below is described the installation of the FTDI drivers. This can be used as a guide for installing drivers for modems using other chipsets.

FTDI drivers can be downloaded from FTDI

Since Paparazzi is currently configured to use /dev/ttyUSB0 it's easiest to just create a link to the required device.

Once the FTDI driver (kernel extension) is loaded it takes over for all FTDI connections. This means that it will not be possible to program the Lisa/L or Lisa/M boards while the driver is loaded.

To unload the driver use the command

This should not give an error. if it does then try again a few times after quitting programs that may have used the connection. If the driver still fails to unload then a reboot may be required.

When it comes time to connect the modem again you'll again need the driver loaded. This can be done with the complementary command

Programming the Lisa on OS X

The problem: The "default" vendor id and product id for the ftdi device on Lisa is the same one used by all the manufacturers of clone usb-serial interfaces. This isn't an issue on Linux because of the udev rules file we use does not load the ftdi drivers for lisas programming interface. Windows and Mac OS X don't use this file so they can only use vendor id and product id. So as soon as you plug in Lisa they load USB->serial port drivers for the two ports they believe are on Lisa causing a conflict. The programming of Lisa happens through a different mechanism and does not want the programming interface of Lisa to be taken by the FTDI driver which has already been loaded. For OS X there is a hack we can do that makes it better until we can get vendor and product ids sorted out. It involves modifying the /System/Library/Extensions/FTDIUSBSerialDriver.kext/Contents/Info.plist file. We change it so only the first of the two serial interfaces is loaded. The second is not as it is the programming interface.

The File (edit with a text editor):

Here is a diff between a "vanilla OS X" and one that has been modified (Essentially below was removed):

Once you have edited the file

To reload the driver or you can just reboot.

It is expected as Paparazzi moves to supporting more operating systems that unique product and vendor ids will be obtained thus removing the need for this step.

FlightGear has been packaged for use on OS X. This package can be downloaded from: http://www.flightgear.org/download/

There are several packages available. Recently, FlightGear 3.0 was released. A binary for OS X is available, and seems to work properly on Maverics (OS X 10.9.2). Follow the directions here for installation. Additional documentation can be found here. 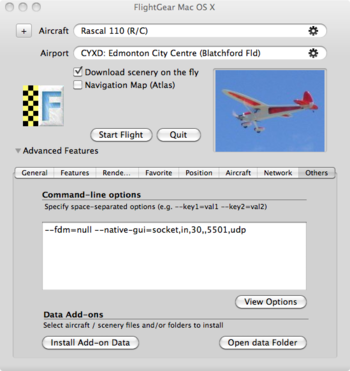 Once FlightGear is installed, the GUI launcher can be used to set common options. By clicking on the Advanced Features arrow, one can gain access to many more options as well as an interface to specify command line options (the Others tab). This is where one can specify the flight dynamics model and network connectivity required for visualizing Paparazzi simulations as described on the Simulation page.

Note TJ1 is the name of the aircraft you must substitute this with the name of your aircraft.

For Flight Gear visualization, version 3.0 or greater with Rembrand switched on is best. If you wish to use version 2.4 or lower, you must add the following to the firmware section of your airframe file: 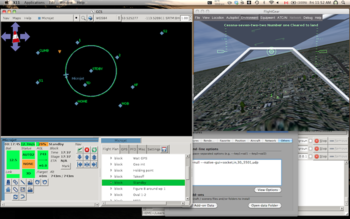 JSBSim is an open-source flight dynamics and control software library. It can provide a more realistic simulation environment over the basic built-in Paparazzi simulator. See the Simulation page for background information and how to run a normal simulation. After this can be done in a satisfactory manner, follow the steps below to utilize the JSBSim flight dynamics model.

Differences with the Linux version

This section is intended to document all the subtle differences between Linux and Mac OS X versions of Paparazzi.

The default editor in Linux is gedit, but in OS X, it is open, which simply uses whatever the default program for opening .xml files is setup.

In C applications, such as tmtc/c_ivy_client_example_1.c, this should be set adaptively by something like:

Is there a better way to do this?