Difference between revisions of "User:Earthpatrol"

Developing autonomous capabilities for HooperFly using the Lisa MX and Elle0 autopilots from 1BitSquared in tandem with PaparazziUAV.

The collection of HooperFly frames configured to fly with Paparazzi.

Each frame and associated components(motors/escs/wiring harness) are tested for functionality using a MultiWii FC and DSM2 receiver prior to the Lisa/MX autopilot integration. 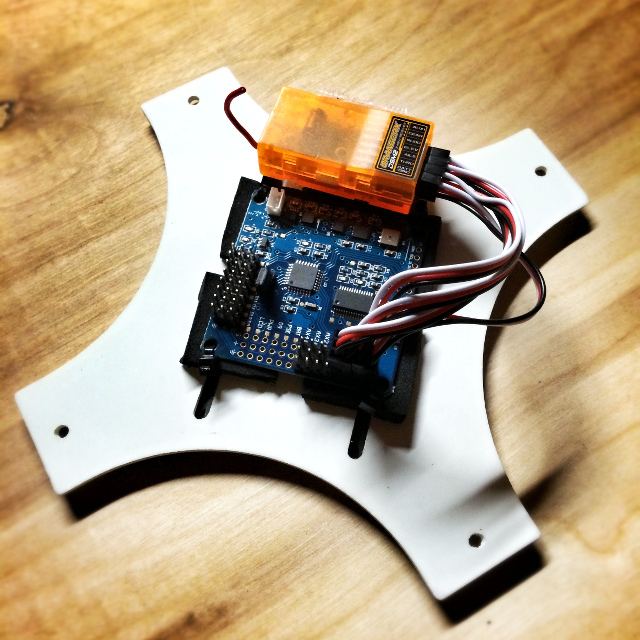 Attempting to use PaparazziUAV to fly four HooperFly frames in a synchronized autonomous fashion. 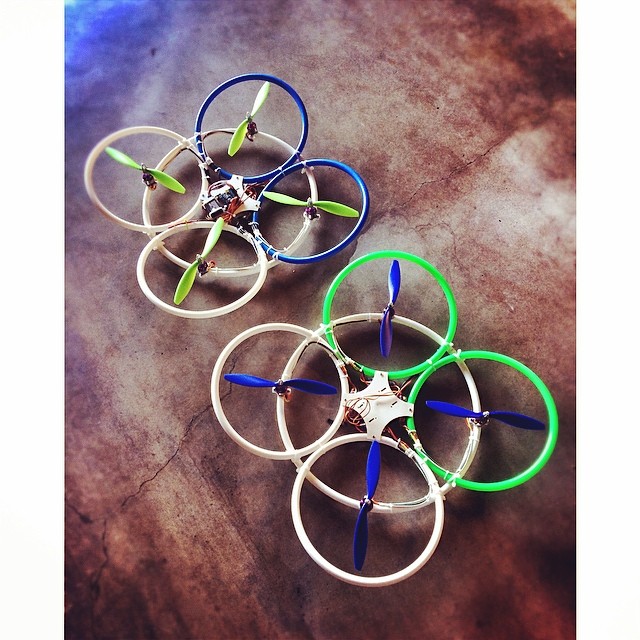 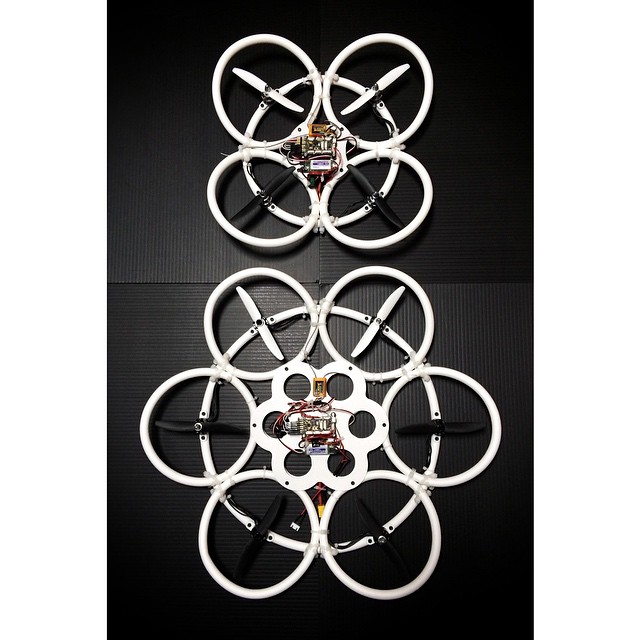 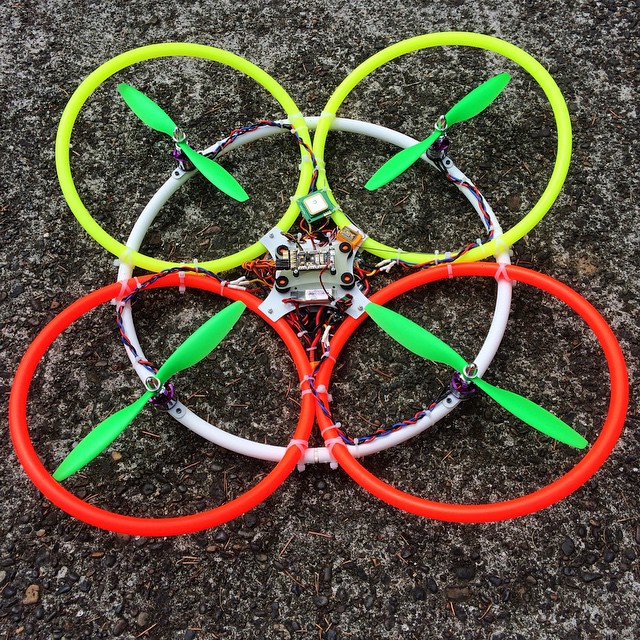 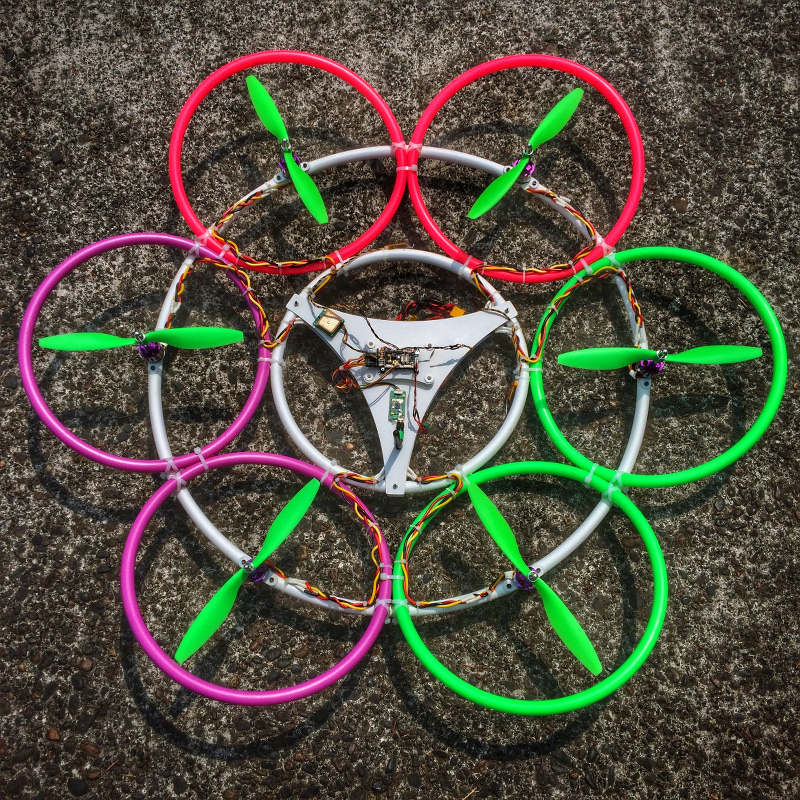 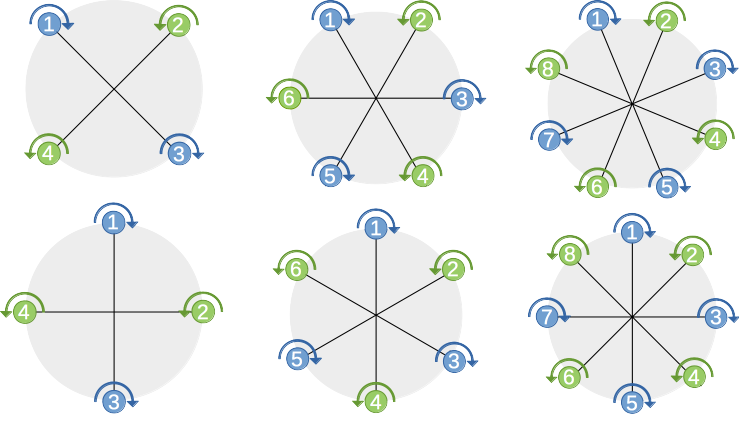 All HooperFly airframe configuration files are located in the directory:

Reference the JSBSim Documentation for a discussion about the STRUCTURAL vs. BODY frame as well as details related to each section of a jsbsim configuration file.

All HooperFly JSBSim aircraft configuration files are located in the directory:

This is a placeholder for rotorcraft flight research as it relates to Stablization/AHRS pairs.

ESC to Motor Wiring and Rotation

The UBEC DC/DC Step-Down (Buck) Converter - 5V @ 3A output from Adafruit is recommended for supplying power to the 1bitsquared autopilots; these include the Lisa/MX and the Elle0.

If you plan to monitor the battery voltage, the Elle0 requires the addition of a voltage divider to the power circuit: 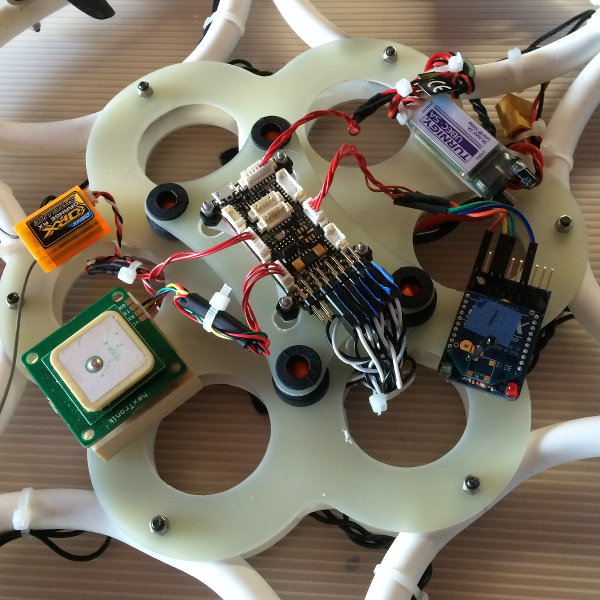 There are some signal/power dynamics associated with Xbee radios that can sometimes result in a non-operational radio. The following links are useful when looking to un-brick an Xbee radio:

3DR telemetry clones available on Ebay use the SiLabs chip.

Based on some simple initial testing, it looks like each aircraft will need an air/ground telemetry radio pair(i.e. point-to-point connection). Each air/ground pair should be assigned their own unique NET_ID. Programming the air radio requires the use of an FTDI-to-USB board for changing the NET_ID. The ground radio has a built-in USB connection and does not require an adapter for programming. The telemetry radios are shipped with a default NET_ID = 25. Picking a NET_ID other than 25 is advised to reduce the chance of NET_ID collision due to other aircraft using default radio settings( valid NET_ID values: 0-499).

The ground station antennas should be vertically spaced a minimum of two wavelengths from each other to reduce interference related issues. Applicable wavelengths for commonly used telemetry radio frequencies:

Using the Spektrum DX6i transmitter as an RC link.

Define the roles of the "flap" and "gear" switch for the transmitter. In this example, the "flap" toggle is used for the radio mode and the "gear" toggle as the kill switch.

Now that you have your GPS enabled autopilot connect to the GCS, verify the following toggle switch/autopilot states:

As of November 2015, the channel assignments for Spektrum radios were modified to reflect a Paparazzi centric view of channel assignments. There are two options for dealing with the change. One is to reverse the appropriate channels on a previously programmed spektrum transmitter; the other is to compile the airborne code with RADIO_CONTROL_SPEKTRUM_OLD_SIGNS defined.

Given the above mapping, it is expected that the Aileron/1, Elevator/2, Rudder/3, and Flap-Aux1/5 channels would need to be reversed.

Given the above mapping, the Aileron/1, Elevator/2, and Rudder/3 need to be reversed.

Flash the firmware with the latest Paparazzi that includes patch related to binding DSM2 receivers with LisaMX in spektrum_arch.c:

The transmitter must bind using the DSM2 protocol only. Note: The DSMX protocol is not currently support in Paparazzi.

The default "front" of the Lisa MX controller is dependent on the placement of the IMU on the autopilot pcb board. This can differ between revisions of the autopilot. The PHI/THETA/PSI parameters, in the IMU section of the airframe definition file, are used to normalize the body to IMU placement.

The BMP is used to load the appropriate firmware for a given aircraft.

The following command will upload firmware to the autopilot using the JTAG connected Black Magic Probe:

Add the clean_ac target prior to the ap.upload target to force a clean build and load:

The appropriate device id for the BMP needs to be set in each airframe file for the upload feature to work correctly. In the firmware section of the airframe file, under the target named ap, add a <configure name="BMP_PORT" value="/dev/id_of_bmp_device"/> line. See the example below:

Now unplug the Black Magic Probe, then replug it WITHOUT holding the button down. 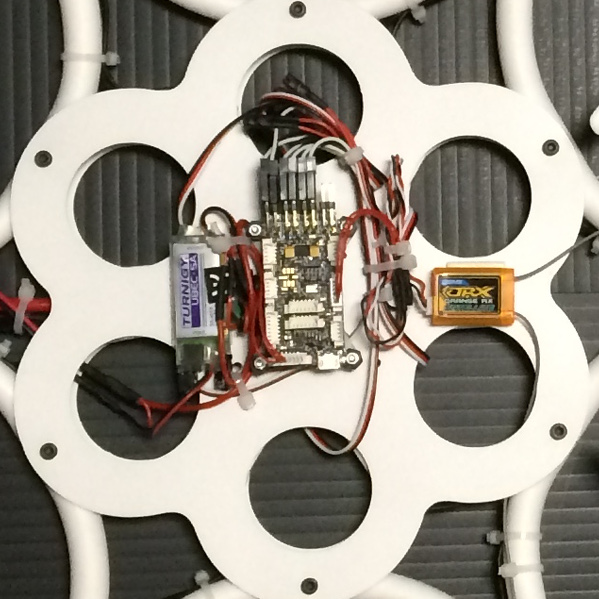 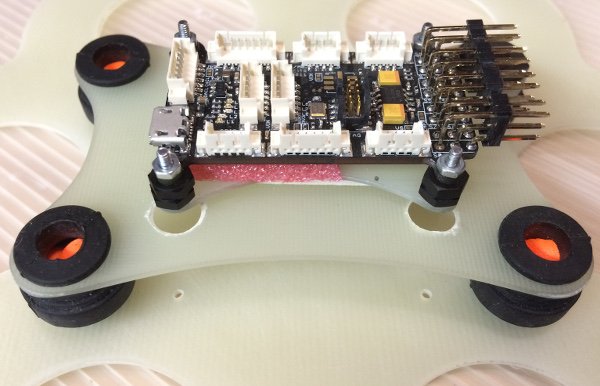 First flights using the vibration isolator mount resulted in a considerable reduction in the X and Y accelerometer data. The Z-axis was reduced to about 0.4g or 3.9m/s^2. 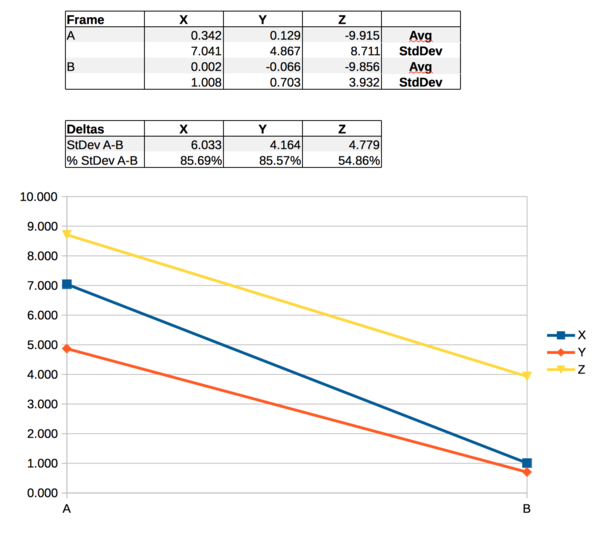 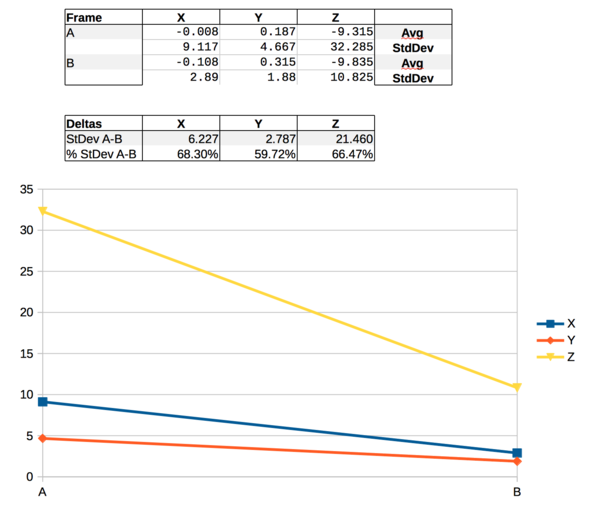 The addition of a vibration isolator mount greatly improved stability of the aircraft when in H_ZH and NAV mode. Here are the vibration results: 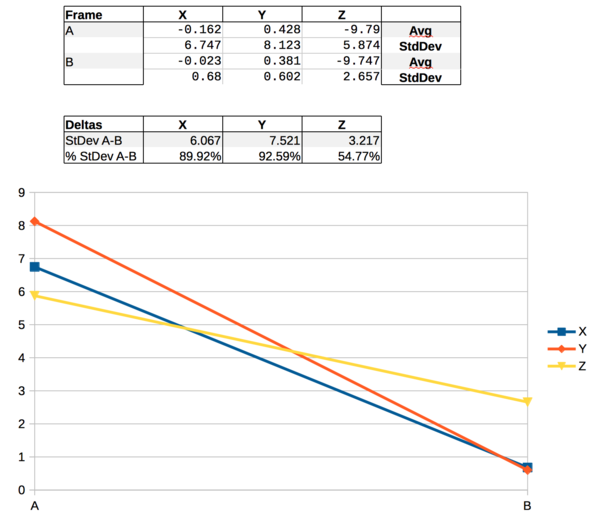 The dfu-util tool, version 0.8 or newer, is required for flashing the Elle0.

For Mac OS X, install it with brew:

For Ubuntu Linux, install the Vivid version. Click the link to get the package: DFU-UTIL AMD64 Link

Once installed, verify the version:

Based on previous testing with the Lisa/MX, it was decided to use the vibration isolator mount on this frame in tandem with the Elle0. 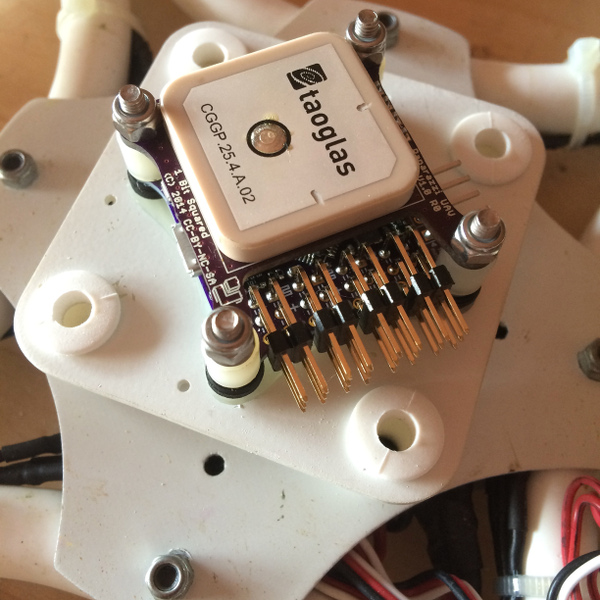 A step-by-step for binding Spektrum receivers to the ELLE0:

The RX(s) are now bound to your TX.

The processes used to calibrate the actuators and sensors for the Elle0 are nearly identical to the those used for the Lisa/MX.

With the propellers removed from the multirotor, verify throttle, roll, pitch and yaw functionality prior to initial flight tests as well as expected motor spin directions. The autopilot should be in manual flight mode during this verification process.

It is best to have a fully populated airframe with a working telemetry radio running on battery power for IMU calibration purposes. Be sure to remove the propellers from the motors before proceeding with IMU calibration. For a general overview reference: ImuCalibration.

From the command line, run the "calibrate.py" tool over the collected accelerometer sensor data

From the command line, run the "calibrate.py" tool over the collected magnetometer sensor data

Calibrating the magnetometer of a RacerPEX Hexa class aircraft is difficult based on it's size. Rotating an aircraft of that size is awkward and, depending on your arm length, very challenging.

IMPORTANT: Mounted propellers are needed when performing current calibration. The aircraft needs to be safely secured and stable to allow the propellers/motors to reach maximum throttle for this test. Strong straps, zip ties, etc... are useful for securing the copter to a flat, stable surface for testing.

Contents of the IMU_MAG_CURRENT_CALIBRATION message as displayed in the Messages tool: 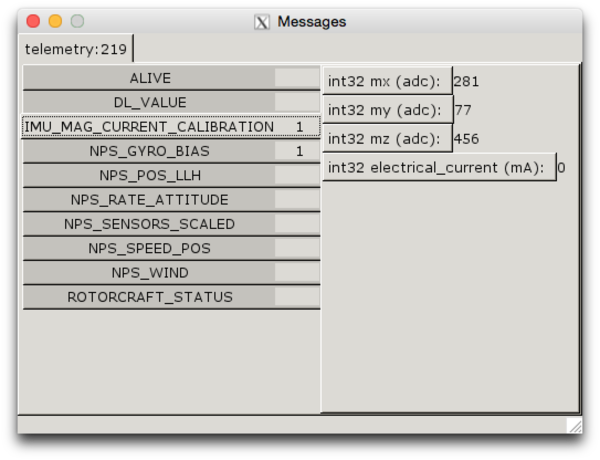 From the command line, run the "calibrate_mag_current.py" tool over the collected magnetometer sensor data

IMPORTANT: Remove propellers before proceeding with ESC/Actuator setup. Once the actuators are calibrated, re-flash the autopilot with the appropriate firmware prior to mounting the propellers. Do some live testing of the motors with the newly calibrated actuators in combination with your transmitter before you add propellers.

For autopilots and ESCs that are powered from a unified/single connection use the following steps:

For autopilots and ESCs that are powered from separate connections use the following steps:

IMPORTANT: Once the actuators are calibrated, re-flash the autopilot with the appropriate firmware prior to mounting the propellers. Do some live testing of the motors with the newly calibrated actuators in combination with your transmitter before you add propellers. 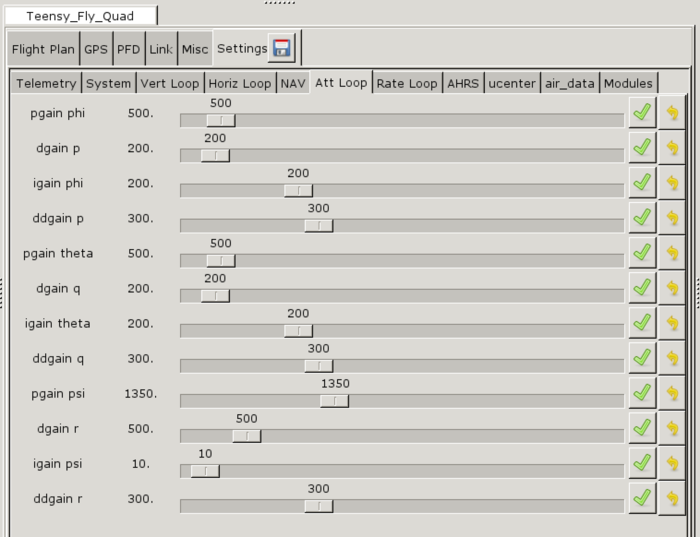 Update and Save Changes to Airframe File 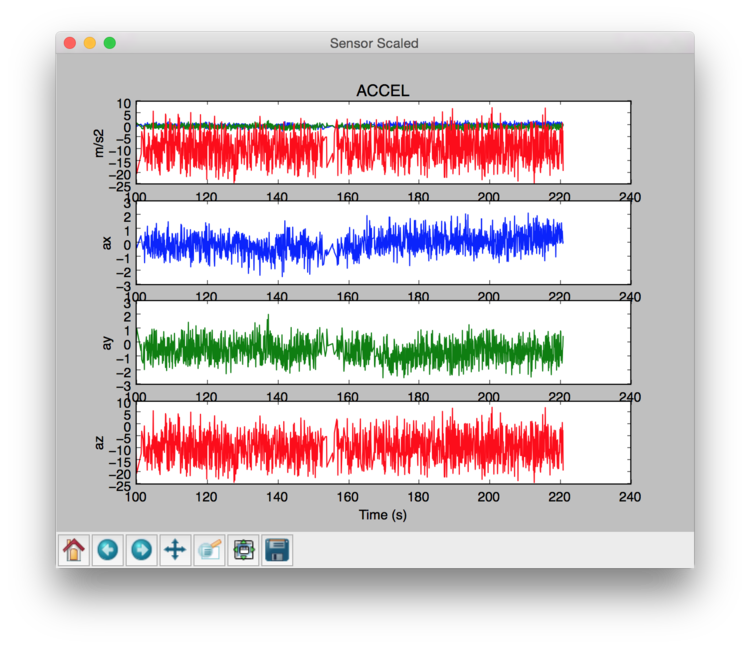 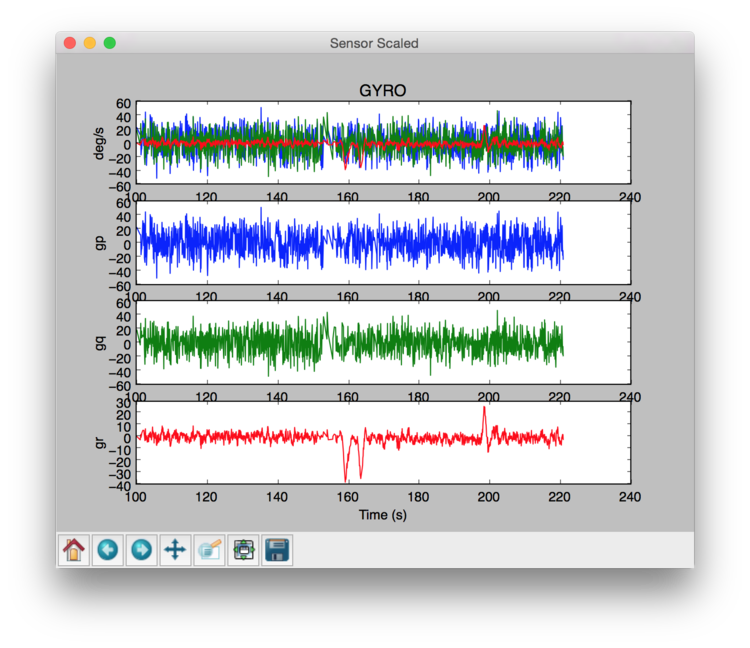 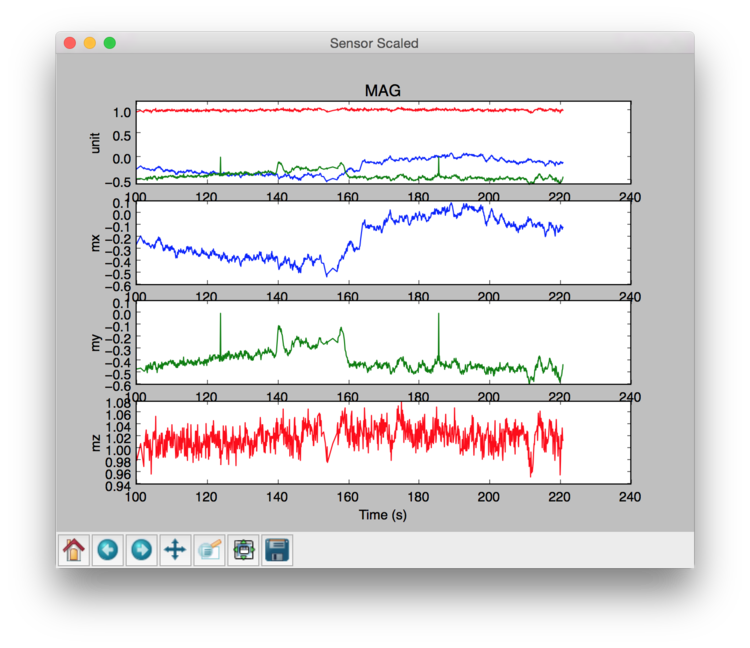 First flights are conducted using RC control only. Any issues related to normal/manual flight should be addressed before attempting more autonomous forms of flight.

The flight plan only needs to have the geo init part, hold position S1 and the line blocks for this test.

Once comfortable, expand this test to include autonomous takeoff and landing and start to improve the flight plan. 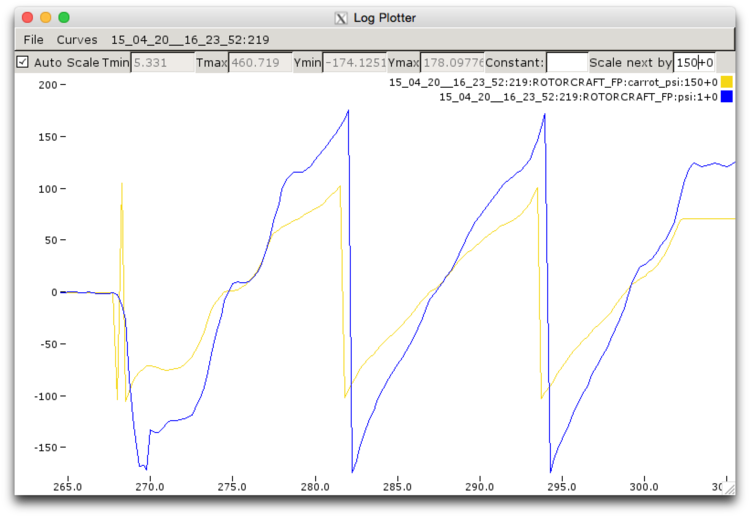 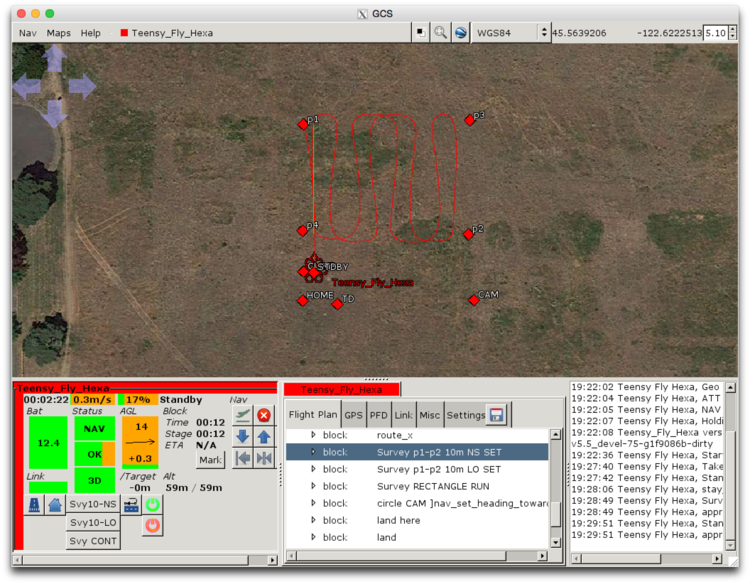 This is a simple rating system for the various HooperFly aircraft based on actual flights in ATT, H_ZH, and NAV mode. The goal is to develop a method for evaluating and minimizing risk when flying each aircraft in a multi-aircraft scenario. A grade is given to each flight mode for each aircraft based on observed flight and the ability to complete a set of flight blocks as defined in conf/flight_plans/HooperFly/rotorcraft_multiflight.xml

With the command line tool ivyprobe, you can see what is being sent over the IVY bus.

The following command will display all packages with all their content:

You can constrain what ivyprobe displays by extending the regular expression for example, the following command will display raw accelerometer data that is being sent over the IVY bus

ivyprobe takes that regular expression and prints the match inside the (), by default it is only showing telemetry:*

Note: The packages/class names returned by ivyprobe can be used as input to the messages tool.

The flying robot commander is a collection of RESTful web based applications for managing robotic flight using PaparazziUAV. It's currently in alpha development that includes real world flight testing.

Currently the code base relies on the python RESTful framework Flask as well as the nginx web server. All source code is managed using the following github repository:

Here's a directory listing for the current set of files that constitute the FRC:

The current implementation is highly decoupled to facilitate research and rapid prototyping. As a common set of use cases/models/scenarios are identified, the ability to optimize/collapse behavior is easily achieved. The Flying Robot Commander(FRC) leverages a RESTful web based architecture along with a simple message passing protocol. One of the benefits of using a web based architecture is the ability to deliver the UI to any device that runs a modern browser.

The current UI consists of a set of html files: index.html, index_flightblock.html, index_guided.html, and index_waypoint.html along with image icons(contained in the img folder). The current implementation leverages javascript that submits http get requests to our flying robot commander request server.

Each http request is serviced by the request server: frc.py, currently implemented using a python Flask framework. Subsequently, the server constructs an `IvyMessagesInterface` compliant message and publishes it to the ivy bus for consumption by PaparazziUAV aircraft and ground systems. Also included in the file system is a test file: url_test.sh that interacts directly with the http request server via curl commands for testing purposes.

Here are a few links to videos showing the flight block and guidance mode interfaces: 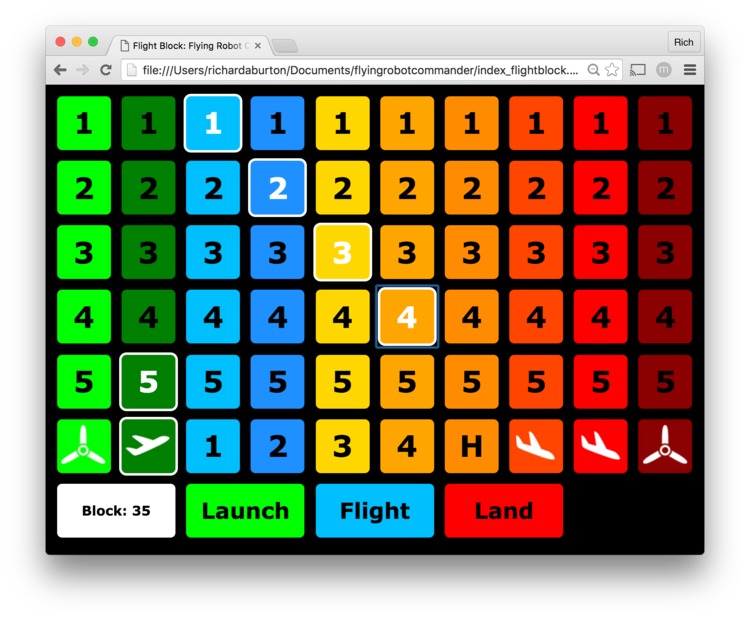 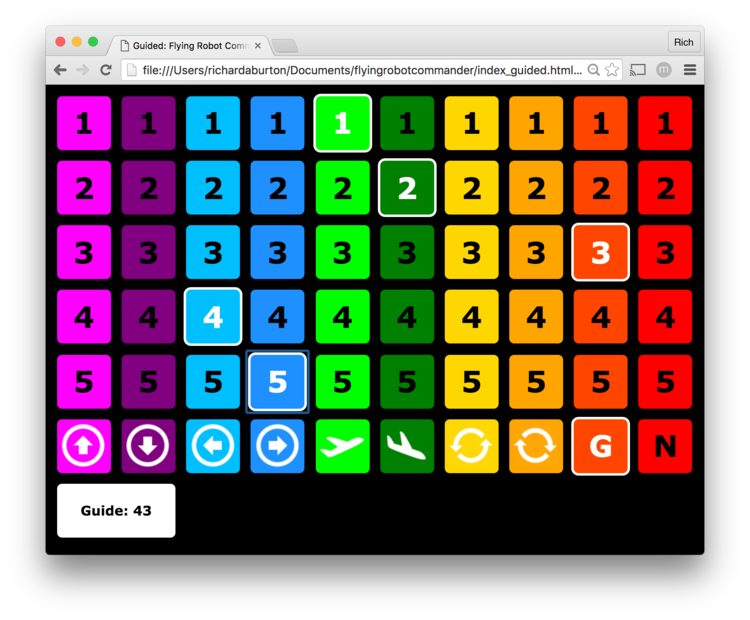 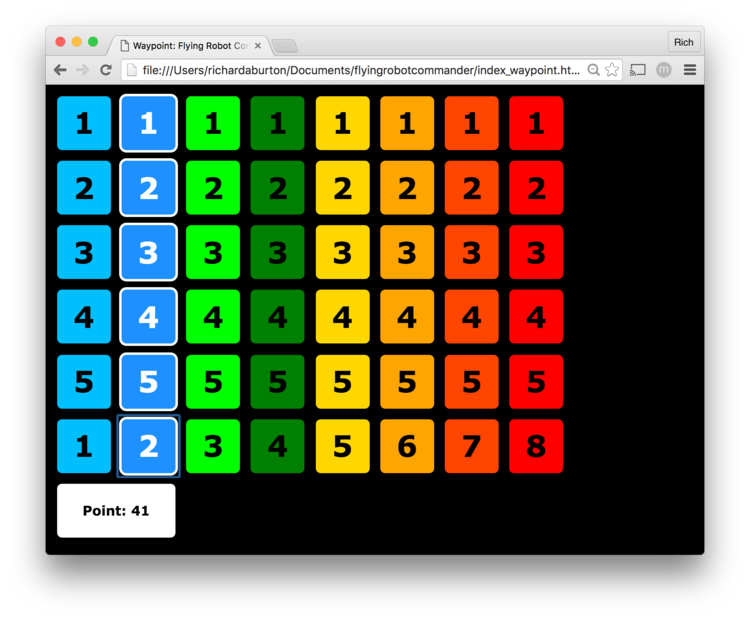