Difference between revisions of "Telemetry"

The set of periodic messages sent over the downlink channel by an aircraft to the ground station is configurable with the help of one XML file, located in the conf/telemetry directory. This file is called by conf/conf.xml and must follow the telemetry.dtd syntax. The fixedwing_default.xml and rotorcraft_default.xmlare provided as an example and should be suitable for most users.

If a module attribute is specified for a message, it will be include in the telemetry only if the corresponding module is loaded.

It is even possible to create your own telemetry XML definition. By the time you need that, it is highly likely you are already an advanced paparazzi user and know why you would and how you will.

Adding a new sensor to Paparazzi and sending the sensor data to the ground example. This example is for adding an airspeed message.

In conf/messages.xml add an airspeed message:

Where id="54" has to be unique. To find an new ID to use there is a script file located at ${PAPARAZZI_HOME}/sw/tools/find_free_msg_id.out (yes it is really a script).

NOTE: Be sure your Paparazzi source and home environment variables are set correctly in your shell Installation#Launching_the_Software)

Every field in the output is a variable from Paparazzi. The type must be the type of a variable in your code (ie. look in your code). Add your message along with the frequency to be sent over the messaging bus (AKA telemetry messages).

The result is a generated file in ${PAPARAZZI_HOME}/var/<AC>/generated/periodic_telemetry.h which consist in a (static) scheduler to that calls specific functions.

Create a function in your C source file that will send your message(s) (using the generated DOWNLINK_SEND_* macros) and register it to the telemetry system so that it will be send automatically for you. You also need to include the header subsystems/datalink/telemetry.h:

where the name in the register function (second parameter) as to match the one in the telemetry xml file.

Past Reference for Paparazzi v5.0 or older

Create a PERIODIC_SEND_AIRSPEED with the following code in the firmware specific telemetry header file (In ap_downlink.h/fbw_downlink.h for fixedwing or telemetry.h for rotorcraft) :

The limited throughput of our RF modems results in a need to carefully choose which data to send, as well as the frequency at which to send it. A sophisticated set of files and parameters have been developed in order to tailor the data downlink behavior automatically, manually, temporarily, or permanently according to any desired parameter. This allows the user to create an almost unlimited possibility of downlink configurations. For example:

Any number of configuration files can be created in the conf/telemetry directory and selected from the conf/conf.xml file. The telemetry downlink is divided into two processes, Ap and Fbw each with a possible mode option. Any number of modes could be created, the default is the first in the sequence. A mode contains the list of messages to be sent as well as the period of each message in seconds. In this example, the ATTITUDE message will be sent by the Ap process at 2Hz in the default mode and at 10Hz in the fast attitude mode. The maximum allowed frequency is 60Hz (0.017s) and the maximum period is 1092s.

The mode can be chosen in the airframe file by setting the TELEMETRY_MODE_FBW constant:

where the (default) first mode is numbered 0.

This mode can also be changed dynamically with a datalink setting or with a set stage in the flight plan.

Note that an (undocumented!) subset of the messages is required to be able to use ground station properly. So it is not advisable to completely remove messages for the Ap process listed in the default mode.

The settings attribute in the description of the aircraft in conf.xml allows the user to specify a list of variables for which values can be changed in-flight:

with the basic.xml file located in conf/settings/. A dl_setting element in this file associates buttons or sliders in the GCS interface to autopilot variables:

where dl_settings elements can be nested at any depth. A dl_setting element just specifies the name of the variable, the allowed range for the setting (min and max attributes) and the minimal step.

The strip_button element adds a button to the GCS strip for commonly used tasks like "Launch" or "Circle". Multiple buttons can be used to assign different values to the same variable. If the attribute group is specified, all strip buttons of the same group will be placed vertically on top of each other.

The param attribute of a dl_setting element allows to specify the corresponding parameter in the airframe file in order to save a tuned value:

where the unit attribute is required for the parameters which do not use the same unit than the corresponding variable (currently only for some angle parameters in degrees in the airframe file and in radians for the variable).

With the advent of small modems such as the popular Zigbee-based models, the usage of the R/C transmitter as a simple data-link is substantially less. Nevertheless, this feature may still prove useful for extremely minimal hardware configurations. Also very useful for tuning of some parameters that are best adjusted by the pilot while flying, such as IR pile neutral settings. While a laptop in the field may be the best for most part of the tuning for sometimes it is more convenient from the transmitter directly. For this it is best to have little more advanced transmitter. For example a Graupner JR MX-22 or alike. On these transmitter there are controls that are good for up and down setting 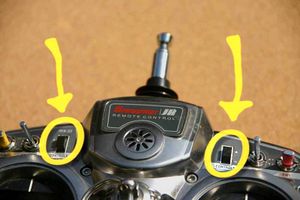 Use these up/down buttons for realtime tuning

A rc_settings element in this file associates switches and sliders of the RC to airborne variables:

First, settings are sorted by mode (AUTO1 or AUTO2). Then a setting is composed of a variable name, a range (corresponding to the range of the RC slider) and a RC name. The RC name prefix can be gain_1 or gain_2, which corresponds to the GAIN1 and GAIN2 channels of your RC transmitter configuration. The RC name suffix can be up or down, which is related to the position of the CALIB switch on the RC transmitter.

The audio-based downlink has been removed from current hardware designs however using the old designs it is possible to implement. With the current low prices of a simple video transmitter, data over audio may come in as a welcomed addition. Feel free to experiment and revive this classical feature.