The Paparazzi Ground Control Station is the heart of the system and the user's primary interaction interface.

Each A/C has an associated strip that that displays information about the A/C and provides buttons for common commands. The strip has the following layout: 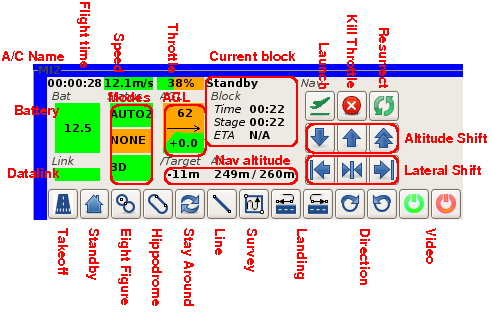 Every change in the waypoints (position or/and altitude) must be confirmed with the dialog box that appears after the move. A modified waypoint remains animated on the map and the GCS continues to re-send the move request until confirmation is received from the aircraft. When clicked, the Mark button places a mark on the map at the A/C position. A snapshot from the video plugin is associated to this mark and can be viewed by moving the mouse over the mark. A click on the mark opens a dialog box allowing to delete the mark. A click on the colored bar at the top selects the corresponding A/C in the Notebook. 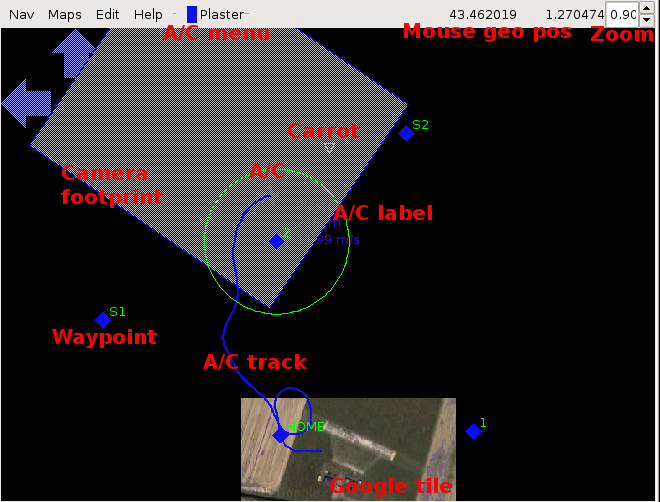 You can pan/zoom the map using the following:

The default black background can be automatically filled with calibrated satellite photo tiles from Google.
See the Maps page for more info.

The properties of any waypoint in the currently loaded flight plan can be modified by two methods:

Waypoint edits are sent to the aircraft immediately upon confirmation in the dialog box. The GCS will re-send the data and the waypoint will animate until the aircraft confirms receipt of the move request. New waypoints cannot be added during flight.
See the Flight plans and Flight Plan Editor pages for more information on waypoints.

The notebook frame contains one page for each running aircraft. Each aircraft page is itself divided into subpages displaying telemetry data and giving access to the autopilot tuning parameters.

Note that the colored tabs at the top of this section allow the user to select among multiple aircraft. 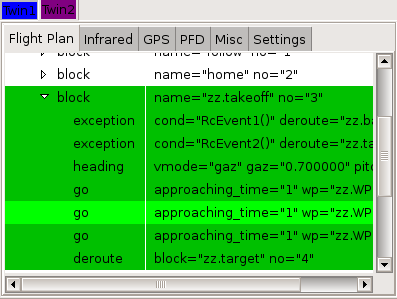 The full tree of the flight plan is given in this page. The current block and the current stage are highlighted. A double-click on a block allows the operator to immediately switch navigation to this block.
See the Flight plans and Flight Plan Editor pages for more information on flight plans. 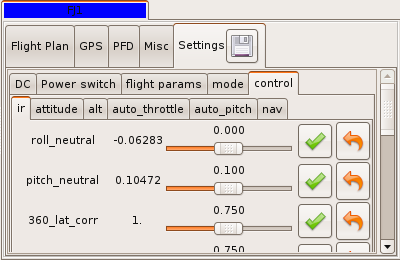 The setting page allows the operator to change variable values during flight. The layout of the page is generated from the dl_settings section of the settings.xml file, one tab is recusively associated to every section.

On each line is displayed (from left to right), the name of the variable, its current value (periodically sent by the A/C), a slider or radio buttons for user input, and commit/undo buttons.
See the Telemetry page for more information on settings. 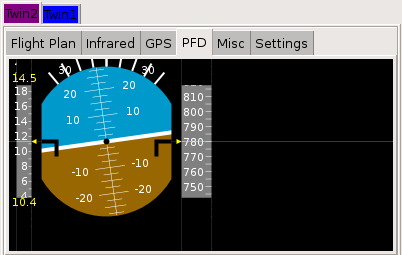 The Primary Flight Display contains an artificial horizon and two scales displaying the current ground speed (left side) and the altitude (right side). Minimum and maximum speeds are shown under and above the speed scale. A click on the scale resets these values to the current value.

The GPS page gives the list of satellites tracked by the receiver and their respective signal strengths in dB. (35 is low, 45 is excellent) and if they are used to compute the fix (green: used, red:not used). This page may help to tune the position of the receiver on the aircraft relatively to other components (e.g. datalink and video transmitters).

The Infared page is only used for aircraft not equipped with the vertical infrared sensor. This page reports the required pre-flight calibration value as well as the evolution of the in-flight calibration correction factor (from hybridization with the GPS information).

The -mplayer option of GCS allows to the user to display a video stream in this window. The video window can also be exchanged with the map by clicking anywhere inside the frame. Use the following line in your control panel to enable the video window.

The alarm window displays a list of recent errors such as: