Also include OSAMNav.h in your flight plan:

In our example the waypoints are called "Center" and "Edge":

Then you can add flower to your flight plan:

Note that in the function InitializeFlower the waypoints need the prefix "WP_".

You can add the bungee takeoff routine to your flight plan like so...

***Precaution should be taken while tuning the auto takeoff. If the MinSpeed is too low, the prop could turn on while holding the aircraft!***

With this navigation routine, an aircraft can survey the area of any convex polygon given an entry point, the number of waypoints which define the polygon, the sweep width and the desired orientation of the sweeps.

You can add this navigation routine in your flight plan like so...

Here is an example of how you should declare each of the corners of the polygon.

S1 is the entry waypoint and the first corner. The other corners should be in order clockwise or counter clockwise around the polygon. Even though this group of waypoints must be declared together, where the group appears in the list of waypoints doesn't matter.

If you want the edges of the polygon to show up on the GCS, you can also declare the polygon as a sector. This is not required to run the routine.

If you are wanting to start and stop the Poly Survey this is possible by splitting the Poly Survey code above into the initialization routine and the execution routine. You might want to do this if you are searching for something inside the Poly Survey, think you have found it and then realized you haven't, so you want to continue the survey (not restart it). Using the example above, but with the initialisation and execution code separate:

The Flight Line Routine allows the user to map/follow one dimensional areas of interest like roads and rivers. Given two waypoints, the routine will automatically transition into the flight line to ensure full coverage between the waypoints. In addition, distances before and after the flight line can be used to add extra security to the coverage.

Multiple flight lines can be daisy chained by reusing waypoints as shown below... 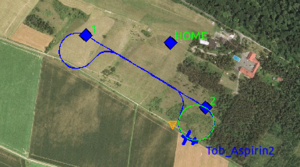 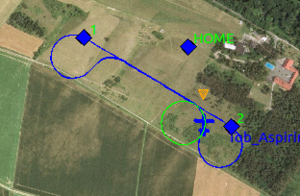 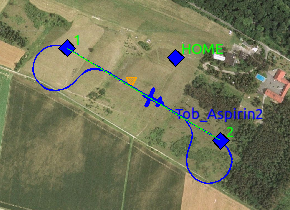 border_line is a nav-routine pretty similar to the nav-line-routine. You can use this nav-routine whenever you want to take care your plane stays on a defined site of a border. For example you can use this routine to fly along a mountain and always turn away from the wall or you can fly along a road/border without penetrating one site.

If you want to use waypoint 1 and 2 you can add border_line in your flight plan like this: