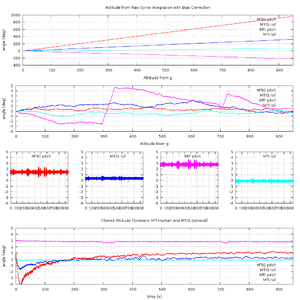 Seeing issue where lisa stm32 crashes randomly. seems to occur less often if periodic loop less frequent (for example reduce from 512 to 256 or 64)

attempt to debug with logic analyzer from saleae.com

Tried to get rt2780usb wifi dongle working with lisa, no luck : the adapter is recognized at some level as I get the following messages :

Since the adapter works perfectly on my karmic pc and I noticed that there a firmware bin file was being requested, i copied it over to the gumstix in /lib/firmware but still no luck. I tried the latest prebuilt binary image (June 18) from gumstix and still the same behavior. Perhaps I need to configure something...

Interfaced a hub to the USB OTG port. bridge the ID pin to GND and run USB+/- and VBUS to the hub. Supposedly hot-swapping is not supported (must boot with device plugged in already) but that could be an old issue and that works now.

Setting up paparazzi source and OpenEmbedded to compile for LISA:

Had to pack up all my stuff this summer and just now starting to get back into UAVing. First on the list is to get a plane in the air. I brought most my electronics with me, and the lab is letting me use a foam plane so I should be flying soon. I'm also hoping to start on quadrotors so I can get more familiar with them and help document it. Other things on the task list: Design a tiny with an overo SPI connection.

Read the wiki multiple times through, built everything acording to instructions, and fired off the program which seems to run in simulator mode, although I'm currently not seeing any action when I hit the "Launch" button. I probably haven't read something important somewhere...

Looked at the hardware designs in CVS to see if I wanted to customize a design or build one of the "released" designs. In summary, the current things folks are building and using are:

Looked at how much to have the PCBs fab'ed by quick turn board house, but unless you order 25 or more PCBs you're better off buying from the listed vendors. I went with PPZUAV:

I check first to make sure all was in stock, and David replied that it was. Order took a couple days to process and a few days for the post office to deliver the priority lettter. PCBs arrived in a little padded envelope and even though I knew the dimensions before, I was surprised at how small they are in the flesh.

Components were mostly from Digikey: TI DC/DC was only available in SMT and no shotkeys.

Mouser had the switching DC/DC in through-hole and shotky diode so put in an order with them as well:

Of note: Looked for GPS modules and antenna and found some items of interest. A Tyco GPS module with a built in antenna for $60 []. Also antenna [].

Different center frequencies are available 1575 MHz and 1579 MHz, but googling seems to show that 1575 is the main GPS freq. Not sure what 1579 is useful for, but it kinda looks like the one paparazzi recommends from their testing is centered at 1579 so I must be missing something.

While waiting for all the hw to arrive, built a wireless GPS device:

Receiver is another XBee Pro in a USB carrier board. The XBee Pro has a wire antenna (XBP-24-?UI). Looking back I should have ordered with the RP-SMA so I can put some coax on there to a big honkin' antenna to improve range.

Main obstacle here is the fine pitch connector on the GPS module.

XBee Pro and the GPS module are 3.3V devices. For the TI DC/DC used on Tiny to produce 3.3V a 1.87kOhm resistor is needed an input capacitor of 100uF is needed. I wired up all these components

Getting things talking was suprisingly easy. XBee devices come pre-programmed and configured for transparent mode at 9600bps. There's destination and source addresses and all sorts of configurable stuff, but out of the box two XBee will just find and talk to each other (great job guys!). Transparent mode basically means that both the devices send traffic to each other transparently, so essentially the end devices don't need to know anything since the XBees just look like a wire.

The GPS module provides NMEA data at 4800 baud so I needed to reconfigure the XBees for that lower baud rate (I may not have needed to do both, but I did anyways). Doing that involves getting out of transparent mode and into command mode (done by sending characters "+++") at which point a few "AT" commands are used to change the rate and save the setting to non-volatile memory.

By the way, Digi also makes a windows application available called "X-CTU" which is very useful. It will test communication with your XBee device, read/write the module's settings, and has two other very useful modes: A range test mode where the the Xbee on the far side of the link has had it's

RX/TX pins wired together for loopback and signal strength is displayed; and a terminal emulator that works nicely (I had a heck of a time finding a good terminal program that worked with my COM26 device, looked good, and was easy to use. No matter how much .ini hacking I did I couldn't get teraterm to look beyond 4 ports).

So first to validate that my DC/DC is providing power and the GPS works, I hooked up a GPS to a serial/USB converter (from acroname) to the GPS RX/TX pins and plugged the USB cable into my laptop. Turn on power and sure enough, lots of NMEA looking stuff spews forth. Next rewired the GPS to the XBee and plugged the USB/XBee device into the laptop and, voila, same data shows up as before but this time the GPS device is totally wireless.

Now I wanted to get more than just a bunch of NMEA strings on a terminal window, I wanted to see the position in google earth or google maps. I bought the plus version of google earth and had used it with my Garmin Etrex Vista successfully, but it turns out that it doesn't work directly with an NMEA COM port based device (at least for me). Instead, there are a number of folks out there that provide little command line programs that open the com port and crank the data out in xml via http socket. Google earth can open a network location.

Once all parts arrive: sorting components and getting BOM and component placement references ready for use. Wiki has all this info nicely laid out.

Since there's more components on the CPU side, that's the side I populate first. Starting with smallest components to largest makes assembly the fastest.

Once all components mounted and the input power wires are soldered, time to apply power. I used a benchtop power supply so I could monitor current.

First order of business is to download USB bootloader over the serial port. This uses the "Download" serial port so you have to disable the GPS, but I hadn't populated it yet so didn't have to bother with disabling it.

Now that there's a USB bootloader, downloading code into Tiny just requires plugging in the USB cable, powering up, and sending the code (which is either done with a "make" command or pressing the "Upload" button in Paparazzi Center.

Now to run a simple program: LED test. Some nice instructions on getting this going are [here].

All goes well and three LEDs are blinking.

Now download autopilot code. A direct connection of the serial port to a USB-serial adapter plugged into my PC relays the telemetry data. Firing Paparazzi Center and executing the session "Flight USB-serial@9600" shows battery voltage so I'm up and running.

Now I attach the IR boards 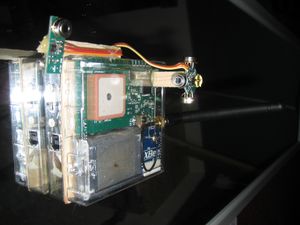 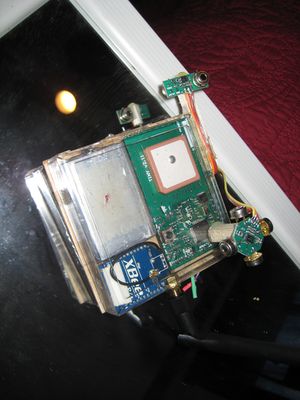 Things are getting sloppy and afraid something will short and fry, so it's time to mount things to get things under control. I had some plastic cases that some lenses came in which happen to be just the right size. Tiny, my 2S lipo, and an XBee fit in one side perfectly, and the other side can be used for extra wires, the USB connector, power switch, and the RC Receiver. The IR sensors are hot-glued on the exterior using a little balsa. Probably won't be useful when it comes time to fly, but it's compact and sturdy which is what I need until I'm ready to start thinking about flying...

I started with the funjet1.xml airframe file because I read others use that with the Tiny2.11. I don't plan to use a dual elevon plane (instead will do a standard rudder/elevator/ailerons setup) so will have to make lots of changes -- not a bad way to learn how things work... The Airframe Configuration page is a great help here.