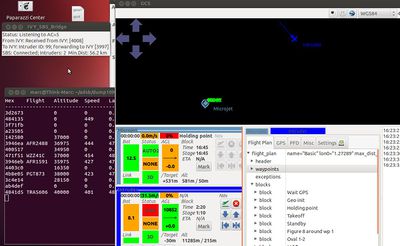 ADS-B is an addition to transponders of manned aircraft which transmits position and velocity data. link Wikipedia

The idea is to use this information to stay clear of these aircraft.

WARNING: Not all aircraft are equipped with this system, it can just be an aid in situational awareness!

It can be used in conjunction with the TCAS functionality: Paparazzi TCAS

You can use a CCC rad1o badge or hackRF together with GNURadio:

ADS-B with the rad1o badge

Or a gui tool that also has a map: modes_gui and select Osmocom as source.

But now there is the opportunity to use DVB USB sticks as cheap software defined radios covering the required frequency.

Here we use the following projects:

Both need to be installed as documented on their homepages.

dump1090 is then started with the --net option to open a server supplying the information on port 30033 The option --interactive nicely shows which planes are received and in your browser at http://localhost:8080/ you can see it on a map.

The integration to paparazzi is realized through a module reading the port of dump1090 and forwarding it to the IVY bus. Additionally it reads the data of the corresponding UAV through IVY to calculate a distance.

Some information is provided in a small window. Intruders (the external aircrafts) are shown in the GCS and their information sent to all Paparazzi aircrafts via ACINFO for TCAS.

The tool recieves SBS-1 messages from localhost port 30003, if no dedicated SBS server and port is given.

The standard DVB antenna was standing in the middle of the room... These receivers are really sensitive.